Posted by Terry Hooper-Scharf at 10:52 No comments:

Mikros, Mitton, Mustang and Me

You see, for me it all began on a visit from Dalborn to Lemgo (both in Lippe, Germany). I was looking around the hypermarket there and saw some comic albums and a few comics.

This was still the day of Bastei before Egmont bought them out and really screwed up things.  There were a few of the ghost comics Spuk Geschichten and Geister Geschichten.  Grabbed those. Then, behind a copy of an Ehapa Batman And The Outsiders I spotted a bit of purple coloured costume.  There were two issues so I pulled them out.   Mikros.  And the back-up strip -Photonik. I had seen neither before but suddenly I was hooked!

I read and re-read the comics and I even wondered whether the comic shop in Lemgo might have copies.  However, the shop had really odd opening hours so I never go to find out.

I have already published something on the subject on CBO so, in case you cannot find it:
haracter called Photonik.

Mikros features three Harvard entomologists and Olympic athletes, Mike Ross (Mikros), Priscilla Conway (Saltarella) and Bobby Crabb (Crabb), who are unwillingly mutated into insect-sized humanoids by the alien insectoid race called the Svizz.  The Svizz plan to use armies of insect-sized slaves to conquer Earth, but Mikros and his friends defeat their plans and overthrow their ruler, Super-Termitor.   Later in the series, the heroic trio is forced to move to France, where they encounrer their arch-eneny, Raoul de Roquemaure, Count of Monsegur, a.k.a. Psi, who turns Saltarella into her queen.

Mikros was the creation of Marcel Navarro, Publisher-Editor of Editions Lug, who later entrusted the character to writer-artist Jean-Yves Mitton, with whom he had previously collaborated on a Silver Surfer story.   Sixteen episodes of Mikros were originally serialized in “Mustang”.

Mitton eventually gave a sequel to the saga of Mikros in Epsilon (a.k.a. Moi, Epsilon, 15 Ans, Fils du Néant) [I, Epsilon, 15-Years Old, Son Of No One], which also featured the return of the nefarious Psi.
Mikros was recently reprinted Editions Sang d’Encre.  Two volumes have been published so far.”

Rather than meander through this myself,I’ve lifted further information from the above excellent Cool French Comics site. “After the success of the Marvel Comics translations launched by Editions Lug in 1969, Publisher-Editor Marcel Navarro decided to create his own brand of French super-powered characters.  The first of these was Wampus (1969).

Then, in 1972, Lug launched the magazine “Futura“, which featured several characters such as Jaleb the Telepath, Homicron, The Time Brigade, The Other, Larry Cannon, Jeff Sullivan, etc. and ran for 33 issues until 1975.  “Futura” was followed by the short-lived “Waki” (1974), about a prehistoric hero whose colorful adventures took place in a post-cataclysmic world, “Kabur” (1975), about a mythical warrior hero and Lug‘s answer to Marvel’s Conan, and finally “Mustang” (Series II) in 1980.

While the above series had all been worthy efforts, none had met with the success Navarro had been hoping for.  Certainly, none rivaled the success of the Marvel material. Navarro then decided to call on writer-artists with a better understanding of the super-hero genre, and try them in a new magazine and a new format.

That magazine was originally going to be entitled “Sup’Heros” but, for business reasons, at the last minute, Navarro decided instead to revamp one of Lug‘s existing western magazine “Mustang“.  With No. 54, “Mustang” therefore became a full-fledged super-hero comic.

Unfortunately, the new “Mustang” was not profitable enough -– at least compared to the relatively inexpensive purchase of American material -– and was cancelled with issue 70 in 1981.  Nevertheless, it had revealed two new, native stars to the French readers: Cyrus Tota with Photonik, and Jean-Yves Mitton with Mikros.

Seventeen episodes of Photonik were originally serialized in “Mustang“.  (The last one was produced by Mitton.)   After “Mustang“‘s cancellation, Photonik returned in the Marvel-based magazine “Spidey“, starting with No. 22 in 1982.  In 1987, four episodes were again written and drawn by Mitton.

In 1999, “Spidey” eps. 21-24 and 25-28 were reprinted in two hardcover editions by publisher Delcourt.”
For far more info on stories/issues check out:

Mitton’s Mykros is superb and I feel are long overdue a translation into English.
According to Lambiek:

“Jean-Yves was born in Toulouse and studied Fine Arts in Lyon. After completing his studies, he found employment in the retouching studio of Lug publishers. Here, he discovered American and Italian comics. His first series, ‘Sammy Sam’, was published from 1965 in magazine Pim, Pam, Poum, Pipo. For this series, he took on the penname Jym. Next, he took over the series ‘Pugacioff’ from the Italian artist Giorgio Rebuffi in Maxi Pipo, which was later illustrated by Amouriq and Yves Chantereau. He also created the little indian ‘Plume’.

With scenario writer Navarro, he made series like ‘Oum le Dauphin’, based on the television series, and ‘Blek le Roc’ (‘Il Grande Blek’). For this last series, he changed from a humorous to a realistic style. He was additionally a productive cover artist for the Lug publications. Under the pseudonym John Milton, he worked for Nova, where he made several comics with superheroes like ‘The Silver Surfer’, ‘The Fantastic Four’ and ‘Spider-man’.

In 1980, he started the saga ‘Mikros’ in Mustang and Titans, and made a comic adaptation of the television series ‘Blackstar’. Continuing his work on superheroes, he illustrated stories with ‘Cosmo’ and ‘Photonik’, and created ‘Epsilon’ and ‘Kronos’.

Starting in 1987, he associated himself with François François Corteggiani, with whom he made ‘l’Archer Blanc’ and ‘Noël et Marie’. In 1989, Mitton took over ‘De Silence et de Sang’ from Marc Malès. Next, he began a series about the Gaulish-Roman time: ‘Vae Victis’ and a comic about pirates, ‘Les survivants de l’Atlantique’. In 1994, he produced his series ‘Chroniques Barbares’, a saga about a tribe of vikings. Additionally, he made ‘Quetzalcoatl’ for Glénat and several comics for the Scandinavian magazine Fantomen, such as ‘Herman Storm’ with text by Eirik Ildahl.

As a scriptwriter, he has worked with Frank Bonnet (‘Attila… mon amour’) and Michel Rodrigue (‘Les Truculentes Aventures de Rabelais’). For the advertising agency Jet Stream, Mitton produced ‘Papoose’ with scriptwriter Chantelouve in 2002. His series ‘Colorado’ was published by Carpe Diem.” 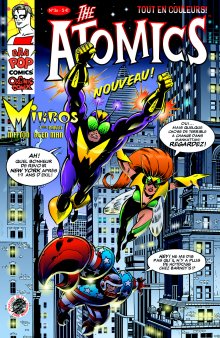 “Cyrus Tota started working for the publisher Lug in the 1970s, mostly retouching comics and making cover illustrations. He contributed to the ‘Blek’ series of the Italian Essegesse studios from 1977 to 1980. In 1980, he started his own series, ‘Photonik’. Later on, he also created ‘Fuzz et Fizzbi’ for Glénat and three volumes of the ‘Aquablue’ series for Delcourt.”


The thing was that,at that time in the 1980s,I had no idea these were super heroes created by French men. Initially I assumed they were German but the style and colour of both strips is so eye-catching and the stories were full of fun and enjoyable -I loved Mykros in Vienna for the Carnival totally unaware that the Black Gondolier was on his way to Earth.

There were epic story lines -this wasn’t just junk comics.

Talk of an animated Photonik tv series was brief so,sadly,I’ve no idea whether it happened or not.
While Cinebook The 9th Art publish an incredible line of books of all genres for all ages I think there is room for the publishing of Photonik,Mikros and other French characters including Wampus.   Wampus,of course,has been collected into a book by Hexagon Comics and you can find details here:

I would encourage anyone with a love of comics to check out Cool French Comics and to discover some of these gems.  Publishers -there’s an opportunity here somewhere! So,please,don’t think Cinebook are the start and end of French comics and with the number of BD published each year…well,I wish I was rich and read better French!

That’s what I wrote back then. Mitton should be working for Marvel US, though that doesn’t mean to say he wants to! Europe offers creators far more freedom and I really must start saving the pennies because I want those two L’Archer Blanc books…I want to Photonik and Mikros books.  I just plain want!


To me, Mitton shows true style -blending European style and flair into whatever he draws.
Want some links ?-THANKS to Sebchoq!
http://www.bleus-et-originaux.fr/index.php?option=com_content&view=article&id=213%3Amitton&catid=18&Itemid=105&lang=fr

And
http://translate.google.fr/translate?u=http%3A%2F%2Fwww.saintrapt.com%2Fimaginer%2Findex.php%3F2011%2F04%2F24%2F87-lee-falk-1911-1999&sl=fr&tl=en&hl=&ie=UTF-8
Below: fans have been waiting a long time to see Mitton’s Phantom work for Egmont (Scandinavia as Egmont does not publish comics in the UK just those adverts with some ‘comic’ work).

The White Archer was another fan favourite and two new volumes appeared a few years back. 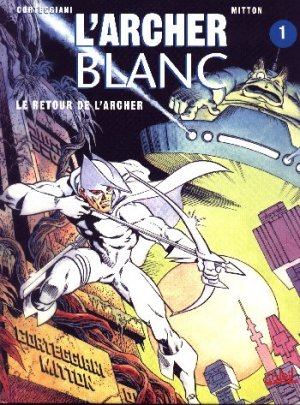 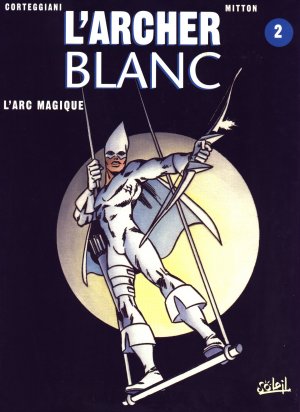 Below: For the last couple years, Mitton has been drawing Ben Hur for Delcourt and his work is incredible.

Until Mitton’s work is published in English…
MAKE MINE MITTON
Posted by Terry Hooper-Scharf at 09:06 No comments: