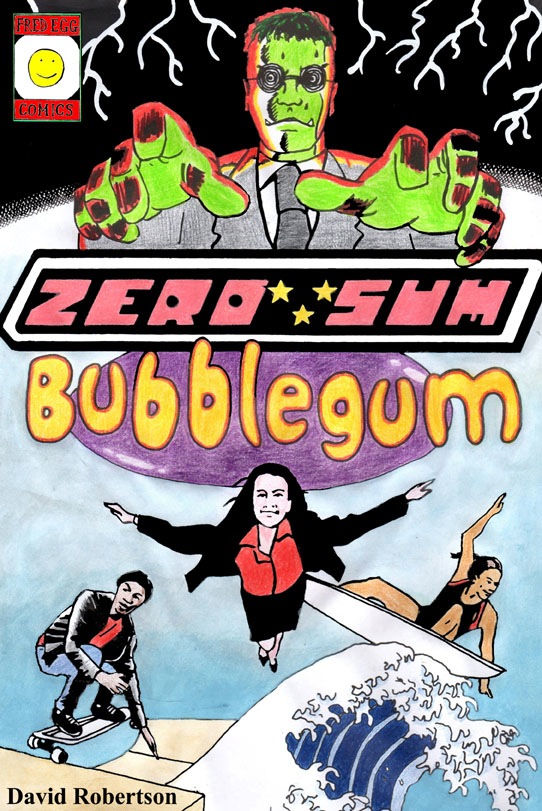 According to David Robertson:

"Zero Sum Bubblegum is a one man anthology – at least as far as the writing goes. “A Book with Death in the Title” causes trouble in a library. “Tiddlywinks” is presented as the most popular sport in the world. A teacher explains “Rights & Responsibilities” to her pupils. A spaceman is left behind by his parent ship. A prankster runs amok in a virtual reality environment. A casually violent carnival worker causes distress in “Why, Waltzer Man..?”, Bruce the Rat stars in “One Adventure Too Many”.

There is a brief history of “Frankensteins”, and some tips in “How to Make Comics Part 14”. I also pay tribute to Big Country singer Stuart Adamson in “Stay Alive”.

And there's more! I have 6 different short stories written by me, with art by 6 others as listed above, on topics such as lost knives, victory laps, stamps, the UK economy, exam invigilators and celebrities on social media."

Now the name may sound familiar? Back in 2014 I reviewed David's other book, Dump
http://hoopercomicart.blogspot.co.uk/2014/01/dump.html

I think I was a little hard on the first issue I saw but that last issue of Dump had me writing that, in many ways, it reminded me of something from the 1980s in its style. That is not a bad thing. The colours on the cover had me flash back to Skate Board Muties From The 5th Dimension because some of their covers were quite flourescent!

There is a nice mixture of black and white and colour strips in this book. That in itself is good because it immediately lifts the book out of the pile of Small Press comics that abound these days.  The Ascent Of Man was a bit...blunt. Mind you, it does make a point. Eileen Budd's Lost Dirk was very well drawn and the punch-line...yeah, I have been there. Can't find anything out about Budd, though I know there is a Fine artist by that name.  Laren Guild by Ludi Price is b&w/grey tones and well drawn -again no info on the artist, though.

My Troubles With Men, by Robertson. The colour toning was very similar to that used in some old 1960s/1970s comic annuals and slaps the eye straight away.

I'm guessing, as Robertson is the writer of 28 (?) strips, that this is a collection of old and new material mixed around.  That isn't such a bad thing because you can tell which is the earlier artwork by him and which the later -including where he is trying different techniques.  The style is developing so the next book should be interesting.