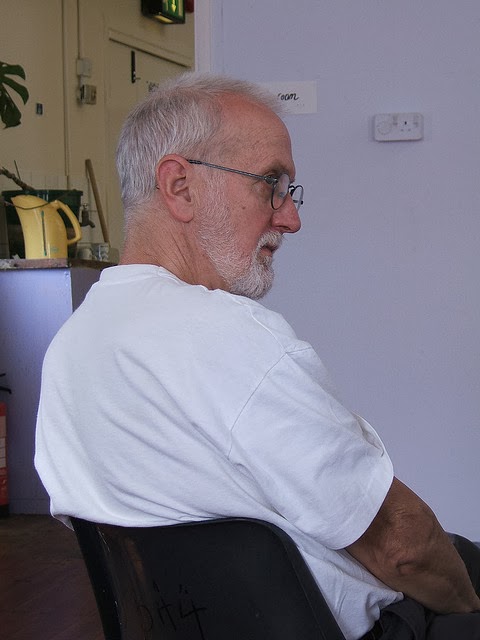 This will be extremely difficult . To put together a summation of such a multi-faceted being as Bib . I think the more people who can contribute the better , because I hardly saw him in the circumstance of conventions , others will know that side of him better .

The irony of this little ode is , in the parallel in which he bounced back from the various setbacks of his declining health , he would flake out ,and then there would be a phone call or an e-mail and Bib's back again .

The Come Back King !

Our quorum of book enthusiasts would meet at his house in a little village in Suffolk , where with his wife , Lynne , an internationally acclaimed quilter and teacher had lived and worked and raised their two sons ; Dickon - the eldest - who is now a diarist and Thomas , a musician .

No longer , sadly , able to get to his loft studio , due to the effects of Pulmonary Fibrosis , a gradual scarring up of the lungs , we met for some weeks in his sitting room , where a little hospital had been set up , complete with home oxygen concentrators , that Bib , ever the film buff , called Huey and Dewey , after the robot Drones in the SF film , " Silent Running " .

Bib , a great fan of Dan Dare and The Spirit and the Goons ; creator of Captain Biplane Interplanetary Airman and his adventures in the Solar Bubble would hold court , and ensure tea , biscuits and enjoyment of conversation ranging from the diversity of literature . Comics , the latest in science , space , exo-planets ; his favourite , parallel universes - the what-if scenarios of many SF authors , through to history , radio comedy and his favourite of all , flying machines of all manner of descriptions , factual or fanciful . 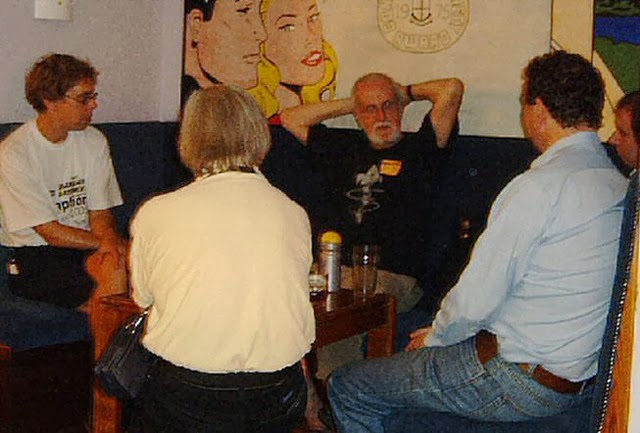 His A1 originals of Captain Biplane are a joyful expression of his boyhood annuals , where his hero and his ever morphable Biplane face down the Boarmen in defense of Queen Ennyl and her realm. Originally Bib and Lynne were models for both . His comics' style was resplendent in pen , punch graphics and coloured inks .

His sitting room , with it's shelves gleaned from postal sorting antiquity with their compartments filled with an array of memorabilia and models , colourful toys and assortments of "founds " , collected over many years of being an artist and enthusiast of the young and inventive and shelves of books , meticulously in order , on art , quilting , superheroes of the Golden Age , side by side with W H Robinson , L Baum and books of the pioneers of aviation and invariably airships . 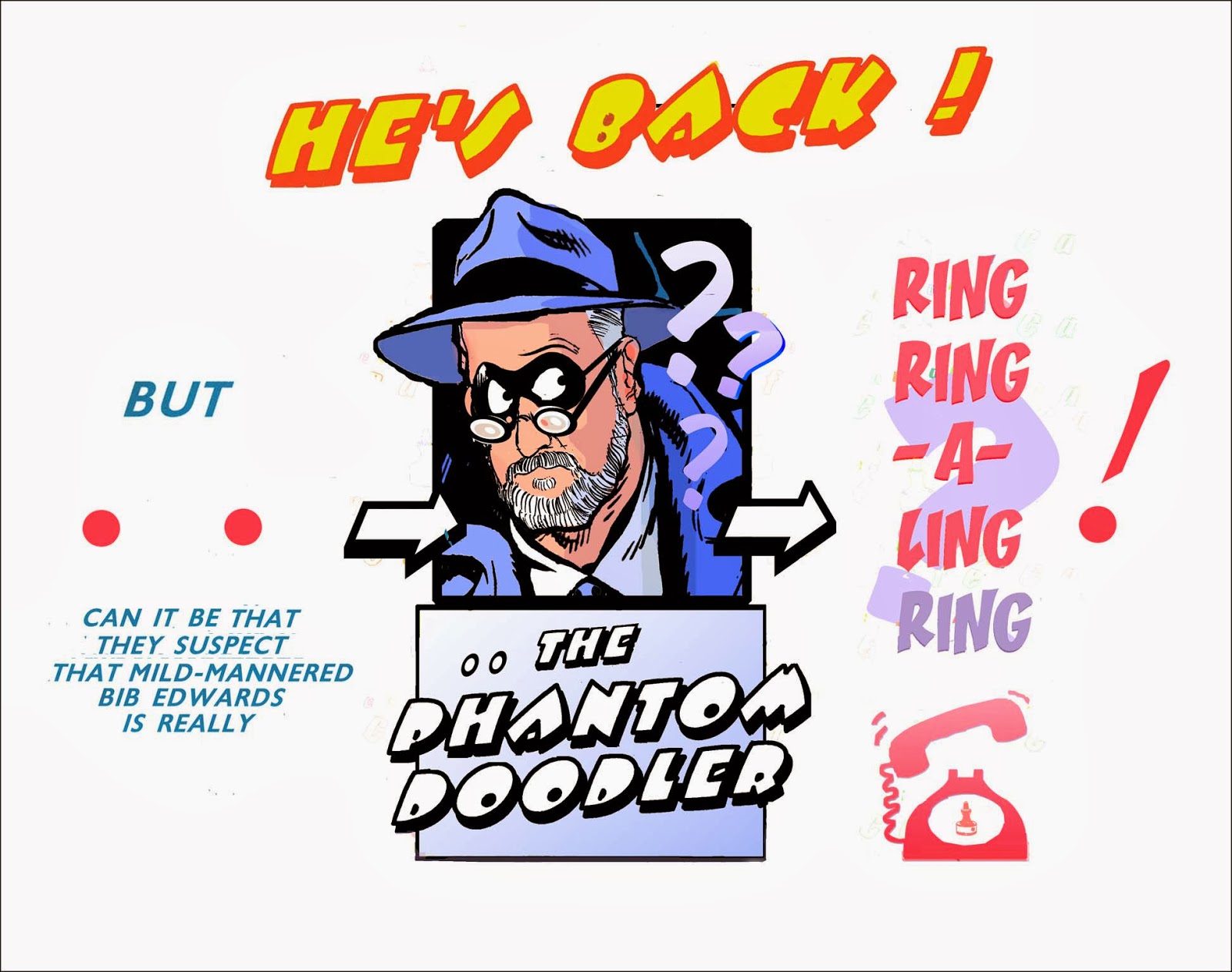 Our meetings became , inevitably , braver on his part . He would , at times , remove the oxygen , and give full voice , if he wanted to share with us  a passage from a book he was enjoying reading . The progression of the Pulmonary Fibrosis , however , meant that he grew breathless and although he didn't show frustration , we could see the effort for him was great . A few weeks ago a room was set up in a nursing home , after spending a while at St Elizabeth's Hospice in Ipswich , where we all visited . A
pleasant room had been set up and a small sampling of his collection was on sills and on a bedside cupboard and set of drawers , a corkboard full of pictures , postcards and greetings dominated a wall .

A carer , who turned out to be a fellow film buff was looking after him when we visited , helped him sit up in bed . We talked and amused ourselves with the usual , occasionally a carer would come in , with
his medication , and he would make all efforts to be the host , introducing us , as always , maintaining his interests , outside himself , an essential for a creative artist who has a talent ,seemingly effortlessly for communicating creativity with everybody . We left after an hour . 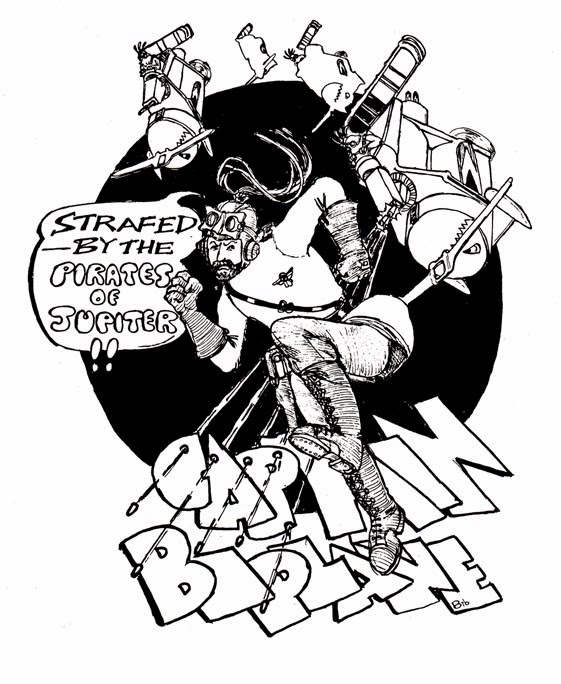 He would spend time with Rod Taylor and his time machine , one of his favourites and his family were coming later .

We all found out the following morning that nothing , absolutely nothing , can prepare you for the loss of a dear friend .  I had known Bib for over thirty years , drawn with him , jammed on underground comics
with him and shared enthusiasms , started a cartoon club with him , shared our love of the countryside and water colours , of which he was an enthusiastic master of the unusual view , sometimes of man's technologies being returned to nature .

Bib was an true friend , a teacher communicator and a like I shall never meet again . 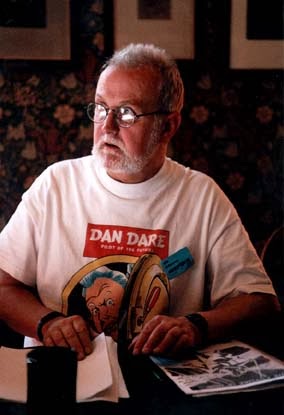 Posted by Terry Hooper-Scharf at 10:32