BK Books: Browner Knowle 7 -I Read It Yet I Live 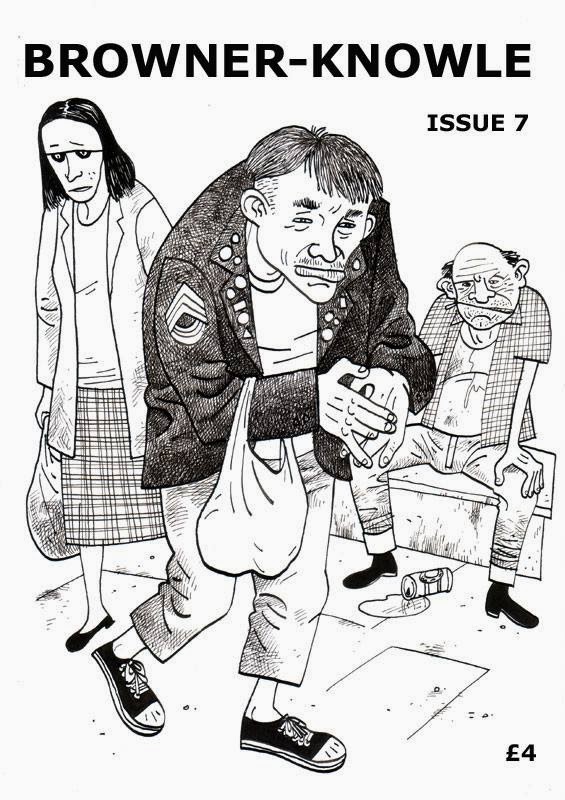 Now before I start, that web address I have just spent an hour trying to find. Paul Ashley Brown everywhere (mostly from old CBO postings) but no web page so I'll have to look into this.

You know there are two absolute metaphysical certainties in this world. One: We'll be dead one day. Two: Suicide rates climb whenever a new Browner Knowle is published. Within the constraints of of the confined internal logic of the psycho-metaphysical rules of existentialism that engage our every day  lives Browner Knowle is the Messenger of death.

I love mixing medication it's like an existentialist lottery. But then....why not?

It is at times like these that I think Mr Brown might even be able to draw a comic.  Let's face it, that is how this aging poster child for the lost Thatcher generation started out -Vigilante Vulture and so on. However, having worked with the writer of said VV it was bound to affect the aging hipster's mind  -he is free and single, ladies so if interested here's his photo (and in the background LMFAOs "I'm Sexy And I Know It" blasts away): 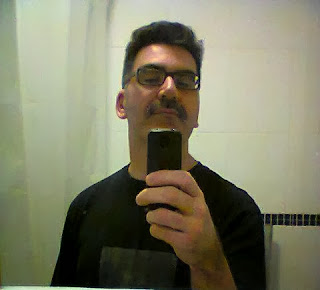 Ahhh. Nothing like a bit of character assassination to start off a day of pain.  So now to the subject of this posting which was temporarily lost somewhere in the Himalaya's until it was found to be a polar bear-brown bear hybrid.

The cover...well, this is just another Bristol street scene and walk through Bedminster any day of the week and you can spot these...tatters.  In fact, another good example is "The Walking Man" -as seen below: 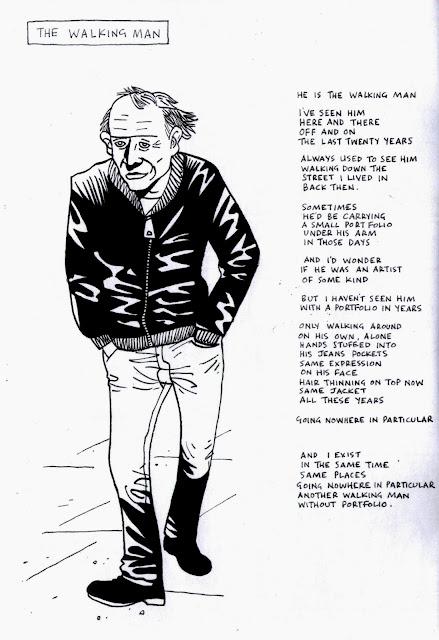 But this is not an issue full of Mr Brown's "Bristol Grotesques".  No, there are two strips in this edition -he would probably call them "contes graphiques".  Anyway, the first is "3 A. M. With The Lights Off", though since you can see that on the page below I do wonder why I wrote that.  We've all been there: the guy talking at you in the car but not really talking to you and the promise of what might be but never really is. Men can be bastards. I'm looking at this through a woman's eyes of course. 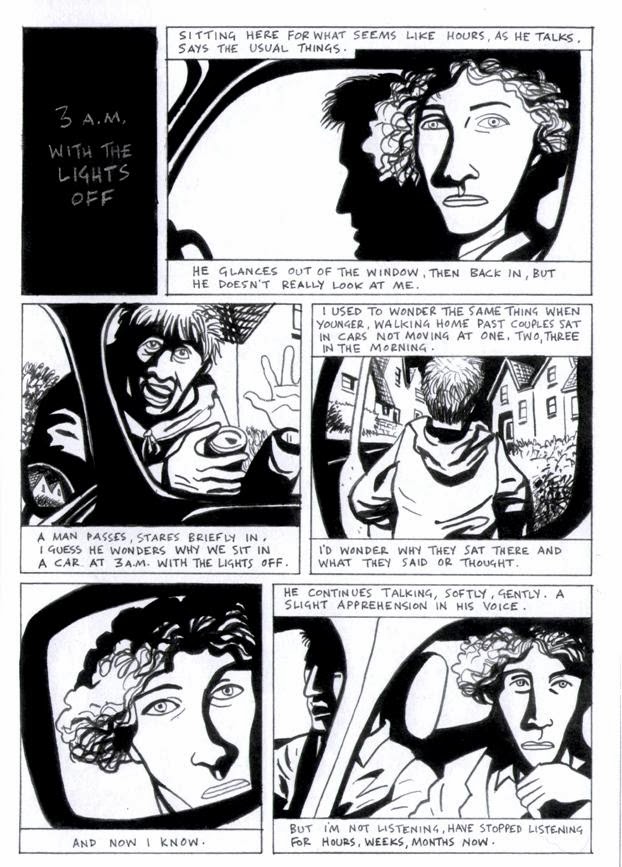 Nice, nice solid blacks.  Mr Brown really could become an artist you know. You know, I feel sorry for the poor utterly depressed man who stood on Perot's Bridge in the City Harbour. Looking into the murky, beckoning waters but terrified of jumping in just in case someone pulls him out and he contracts Weil's Disease.  All the time some git with a sketch pad is saying: "Yes. Like that. Keep that look of total and utter despair until I've finished!" 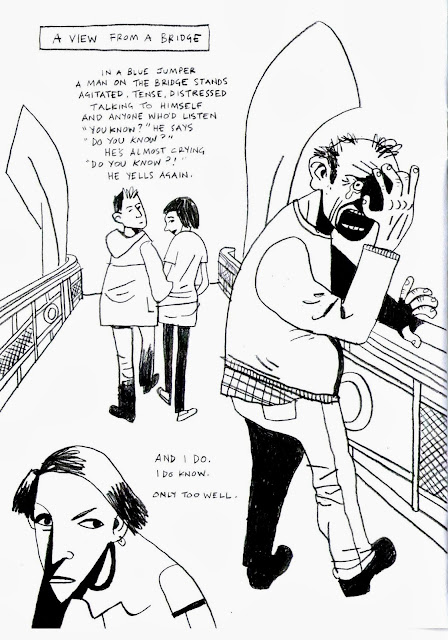 All he wanted to do was kill himself but he ended up in Browner Knowle. Quite depressing. And then we have "Charles Aznevour" and while reading this we should all be singing along. Come on now -you KNOW the lyrics as well as I do. A one...a two...a three and..... 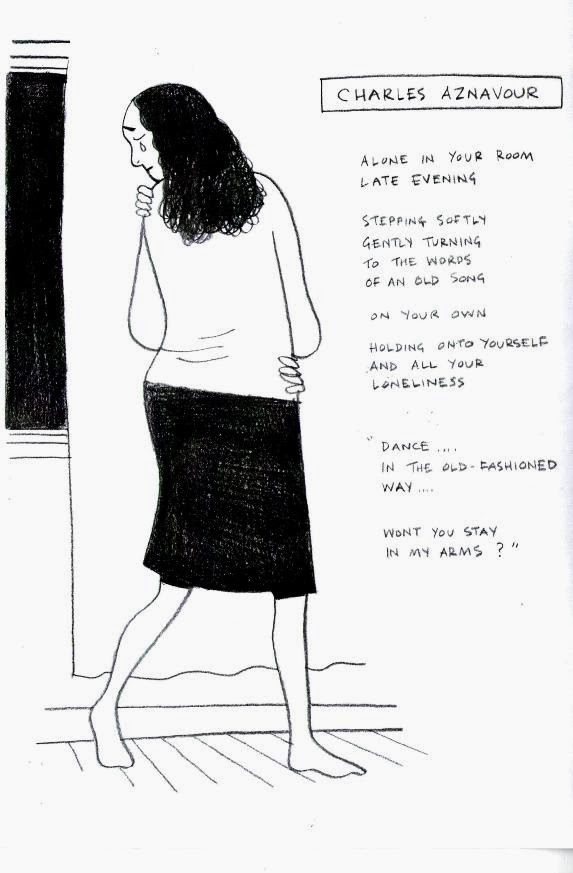 ahh, Charles, you may be 89 years old now but should such a singer-song-writer, actor, public activist, diplomat such as you be in an issue of Browner Knowle?  Yes. We've all been there though some of us find it harder each year to embrace ourselves. Poignant, ain't it me old luvver?

Let's cheer things up and take a peek at Mr Brown after he's met up with a certain Mr Northall (a rival if the truth be told!) for five minutes. 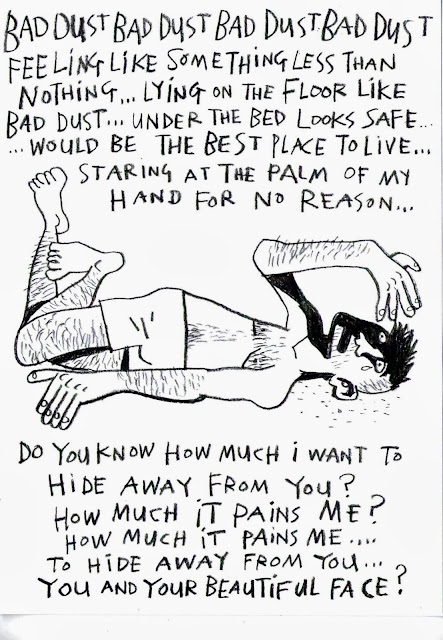 Yes, it is quite terrible when all your favourite 1970s British TV greats have been arrested under Operation Yewtree.  Especially when you scream at the news media for not hyphenating "Yewtree"!

"A Sound From Downstairs" for me can usually mean my irritable bowel syndrome is about to explode into a volcano of....no. No, you don't really want to know that. Besides, in this case, it is the title of the second strip in this book.  Seven pages showing that Mr Brown CAN indeed draw sequential works or comic strips. Compliment with a slap. See what I did there? 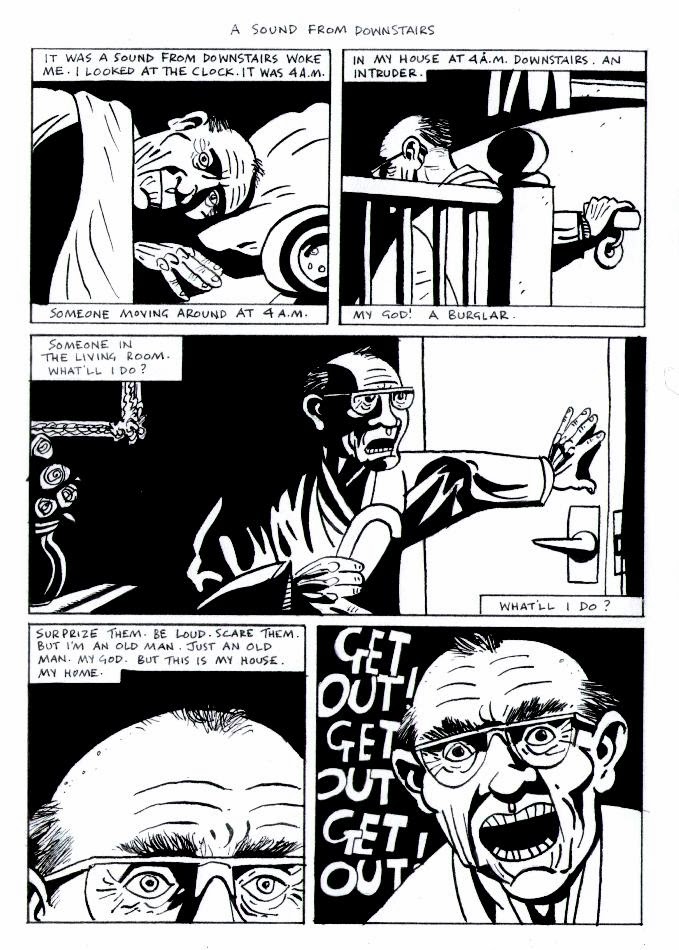 I'm guessing this is Mr Brown in ten years time?  It is a nicely drawn strip -solid negatives and even a little cross-hatching and some nice detailed garden in a panel.  I'd say this was "enjoyable" but I don't quite think that is the point here. Nor is it the point in "Face Down In A Face-Shaped Hole" -actually a third strip. Yeah, I miss-counted but I read this so I've been punished enough.

Over-all it's a nice little book with probably "A Sound From Downstairs" being the longest piece of strip-work from the aging hipster in a long time and I'm not including his preliminary work on the graphic novel "Stuart Hall Touched Me Inappropriately But Not In A Physical Way" due out on the 13/13/13.

But will this tour de force (I really must stop reading these French BD) be the last Browner Knowle -will all those Small/Alternative Press events attended by Mr Brown now be so much poorer for the lack of work from the Dean of Depression?

I put this to Mr Brown who responded cryptically, as usual, over a serving of Cream Crunchy biscuits: "Fans often approach me and ask these questions and I allways respond with 'Dear hero imprisoned with all the new crimes that you are perfecting. Oh, I can't help quoting you because everything that you said rings true' for am I now not in my cell, well, I followed you.." a glazed look takes over his eyes as he angrily presses his face closer to mine and gutterally demanded: "Reggie kray - do you know my name ?"

"Is that an answer?" I asked him. Moving to the middle of his living room, rolling his Asda ennui ridden brother out of the way and strikes a pose. Mr Brown places one hand over his heart and with the other gestures to his dining room: "Ladies and gentlemen -Miss Mireille Mathieu!"

And that, my friends, is how you end a posting.
Posted by Terry Hooper-Scharf at 11:06