Titan Books: The Art of Battlefield 4 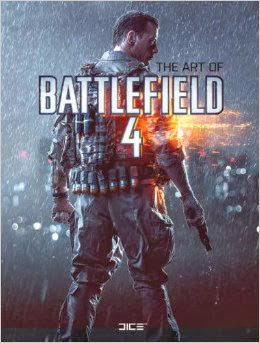 One of the most popular first-person-shooter franchises of all time, the critically and commercially acclaimed Battlefield series has sold over 27 million copies worldwide and been the recipient of numerous awards and accolades – including ‘Best Shooter’ and ‘Best Multiplayer Game’ and ‘Best Graphics’ in 2011. The high-octane series has been praised for its sandbox design and immersive multiplayer gameplay, as well as its gritty storylines and spectacular attention to detail. Its most recent entry, Battlefield 3, winner of over 60 industry awards, has been branded as “an unforgettable, world-class multiplayer suite that’s sure to excite shooter fans” by IGN.

Titan Books’ The Art of Battlefield 4 will give readers an in-depth look at EA’s enormously anticipated action-packed new game, featuring exclusive concept and development art, as well as detailed creator insights and commentary throughout, showcasing the chaos and the carnage of war on virtual front lines.

No fan of the Battlefield series will want to miss out on this visually stunning high-end book - which will thoroughly showcase the art of war.

Okay, I'm NOT a gamer but this book has some incredible art and, rather like The Art Of Assassins Creed, I'm sure gamers will want this book -or even budding artists because this type of book contains art that sets a benchmark.

To see more books by Martin Robinson that are available via Titan Books, click his name on the product details above.

Posted by Terry Hooper-Scharf at 06:55