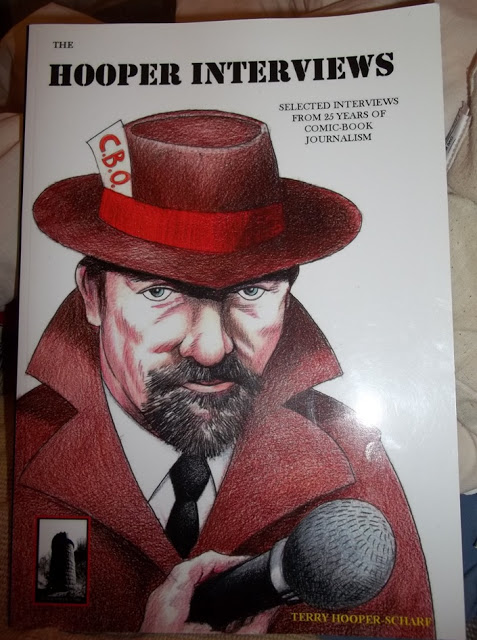 From a huge selection of interviews covering the Small Press, Independent and mainstream Comics from the ,  and US. Here are a few of the best interviews from 30 years.

Someone referred to it as “Comics 101” –background info on creators, how they got started, what tools and even paper/board they use.  Damn near damaged my wrist because it is a BIG book. And Who exactly is interviewed in this book?

Karen Rubins  -The Dark, The Witch and other books

Alan Class        -the man behind the Class Comics series

Kate Glasheen -the incredibly talented artist on Hybrid Bastards, Bandages and other works

Dave Ryan       -the artist/writer behind War of The Independents

Jon Haward    - artist who worked of Tales of the Buddha, Dan Dare and more

Then there are a bunch of interviews related to The Black Coat that was published by Ape Entertainment -Francavilla may be a name familiar to DC and Marvel comic fans these days:

The comic character Gumby also returned to comics and that created another series of interviews titled: The Gumby Interviews (Gumby, himself, was never interviewed)

Yishan Li    -Seriously, do I have to explain who Yishan Li is? DCs Blue Beetle, the Buffy comic and much more!

Pekka Manninen -As far as I am concerned, 's top comic creator and I'm not saying that because I am the UKs top Kapteeni Kuolio (Captain Gangrene) fan!

Emma Vieceli     -come on. Star of stage and musicals not to mention one of the UKs top Manga artists -Manga Shakespeare, Dragon Heir and more.

Sonia Leong      -another noted UK Manga artist whose credits include Romeo and Juliet for Manga Shakespeare.

Nick Defina -the man behind Septagon Studios and Scorn

Donna Barr  -The Desert Peach and so much more that you can check up on at her Midnight Library blog.  She's a comic book Goddess.

Roberta created Bitchy Bitch and many other characters.

Jeff Brooks  -the man behind the  editions of Classics Illustrated

Tania  -Sabrina the teenage Witch and more for Archie Comics

Vanessa Wells -superb creator of a comic I loved titled Shrouded and much more these days -http://www.vanessa.withbits.com

The Etherington Brothers -if you've ever been to a good  event you will have seen the duo behind Malcolm Magic, The 8th Moon Sketchbook,  Moon and more.

Olivier Cadic -the man who brought Franco-Belgian comics to the English language readers via Cinebook The 9th Art!  Everything you need to know.

Mike Western -"The Guv'nor" of British comics with strips such as The Wild Wonders, The Leopard From Lime Street and so many more to his name they would need a book to list.

John Cooper -Again, a creator who worked on many UK comic strips from Judge Dredd, One-Eyed Jack, Johnny Red and many others.
Posted by Terry Hooper-Scharf at 03:33