...which no one told me about until last night and completely by accident!

Posted by Terry Hooper-Scharf at 14:58 No comments:

Posted by Terry Hooper-Scharf at 12:44 No comments:

If you do not wish to receive this type of email, please click: unsubscribe.
Posted by Terry Hooper-Scharf at 12:39 No comments:

We just announced that we have Michael Golden attending as well as some of the regulars from 2000AD.

expect a few more of the Bristol regulars will be long and we're looking to bring along either Mr Mills or Wagner to headline the UK side of things..

James O'Barr is introducing a special 20th anniversary HD screening of the Crow on the Sat. night for us with Q&A and signing afterwards at the showcase cine de-lux and tickets will be very limited for that one so a good thing to push ;)

Should have a full event programme up next week, loads going on this year and probably opening up a second venue due to demand (just waiting for confirmation on that one..)

That's about it for now, will make sure you get the latest as soon as we have it.

Mal.
Posted by Terry Hooper-Scharf at 03:53 No comments:

For those who do not know, Stewart was credited with creating the term Underground Comix during a panel discussion at a comic convention in 1966.

Posted by Terry Hooper-Scharf at 09:29 No comments: 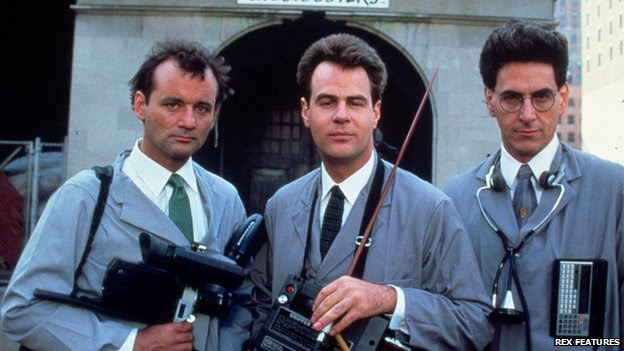 The star found fame as bespectacled ghost-hunter Egon Spengler in the Ghostbusters franchise in 1984.
But he was also a talented writer and director, whose credits included Caddyshack and Animal House.

"His creativity, compassion, intelligence, humour and spirit will be missed by all who knew and loved him," said his family in a statement.

Much-admired in Hollywood, Ramis's death prompted an outpouring of tributes on Twitter.

Billy Crystal, who starred in the director's mobster comedies Analyze This and Analyze That wrote: "Sad to hear my friend Harold Ramis passed away.

"A brilliant, funny, actor and director. A wonderful husband and dad. Big loss to us all."

Iron Man director Jon Favreau added: "No, no, not Harold Ramis. Worked for him years ago. He was the real deal. Growing up, his work changed my life. He will be missed."

US chat show host Seth Meyers called him "one of the all time greats", while Scrubs actor Zach Braff said: "If you're my age and got into comedy, Harold Ramis was one of the reasons. Life is fast and over too soon."

Ramis wrote, produced and directed Groundhog Day, about an irascible TV weatherman forced to live the same 24 hours over and over
Born in Chicago to convenience store owners Ruth and Nathan, Ramis studied at Washington University in Missouri and, on graduation, briefly worked in a psychiatric ward.

He started his career as a writer by penning arts stories for his local newspaper and editing Playboy magazine's "party jokes" section.

"At the time - it was the late 1960s - the Playboy editors wanted to modernize the jokes a bit, to make them more counterculture. A big part of my job was changing 'the farmer' into 'a swinging advertising executive.'"

After leaving the magazine, he joined Chicago's renowned Second City improvised comedy troupe but said he realised his limitations as a performer after encountering John Belushi.

"When I saw how far he was willing to go to get a laugh or to make a point on stage, the language he would use, how physical he was, throwing himself literally off the stage, taking big falls, strangling other actors, I thought: 'I'm never going to be this big.'" 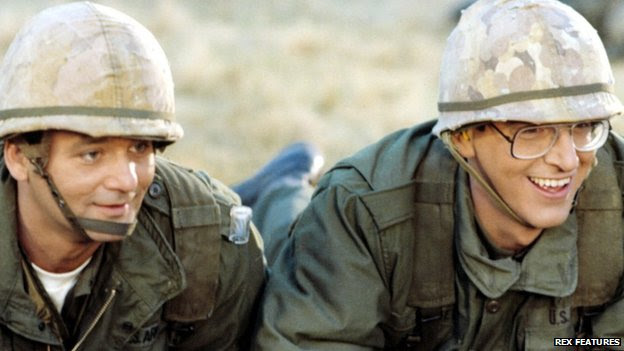 Ramis made a total of six films with Bill Murray, including military comedy Stripes
Instead, he played the straight man - acting as a sardonic foil to Bill Murray in the 18-rated army comedy Stripes, and playing the most straitlaced and scientifically-inclined of the Ghostbusters trio.

The film, a global smash in 1984, spawned a sequel in 1989 as well as a long-running cartoon series. A third instalment had been in development for several years.

Ramis acknowledged that the spectral comedy was his most memorable work but took pride in its longevity.

"People love Ghostbusters in a really big way," he said in 2009. "Parents loved it for their kids. Teachers loved it.

"We got mail from teachers who said they loved that kids were playing Ghostbusters at recess because it was a non-violent game that didn't divide the kids into good guys and bad guys and the games were very co-operative. It's really had some power."

The film remains one of the most successful comedy movies of all time, with takings of more than $500m (£300m) adjusted for inflation.

After the sequel, Ramis developed his career behind the camera, directing former Ghostbuster Bill Murray in Groundhog Day and Robert De Niro in Analyze This.

His other films included The Ice Harvest, Bedazzled and prehistoric comedy Year One, his final movie, in 2009.

Ramis received an American Comedy Award and a Bafta for screenwriting
He said that his time on a psychiatric ward had prepared him for directing Hollywood's elite.
"People laugh when I say that, but it was actually very good training," he told journalist Mike Sacks. "Not just with actors; it was good training for just living in the world.

"It's knowing how to deal with people who might be reacting in a way that's connected to anxiety or grief or fear or rage. As a director, you're dealing with that constantly with actors. But if I were a businessman, I'd probably be applying those same principles to that line of work."

Film producer Brian Grazer once called him "the father of the modern Hollywood comedy", saying his Animal House script was "thoroughly ripped off by the Porky's series" while "Caddyshack was ripped off by Happy Gilmore; Ghostbusters by Men in Black; and Groundhog Day by the Adam Sandler comedy 50 First Dates."

Ramis also inspired a new generation of film-makers, including Judd Apatow, who cast the director in his 2007 comedy Knocked Up.

More recently, he had directed episodes of NBC television's The Office." No matter what I have to say", he once declared, "I'm still trying to say it in comedic form."

He died of autoimmune inflammatory vasculitis, a rare disease that involves swelling of the blood vessels, his agent told the BBC.

The star had been quiet about his illness, which dated back to 2010, but several friends had visited him recently, including Bill Murray, from whom he'd been estranged for years, the Chicago Tribune said.
He is survived by his wife, Erica, sons Julian and Daniel, daughter Violet and two grandchildren.
Posted by Terry Hooper-Scharf at 11:13 No comments: