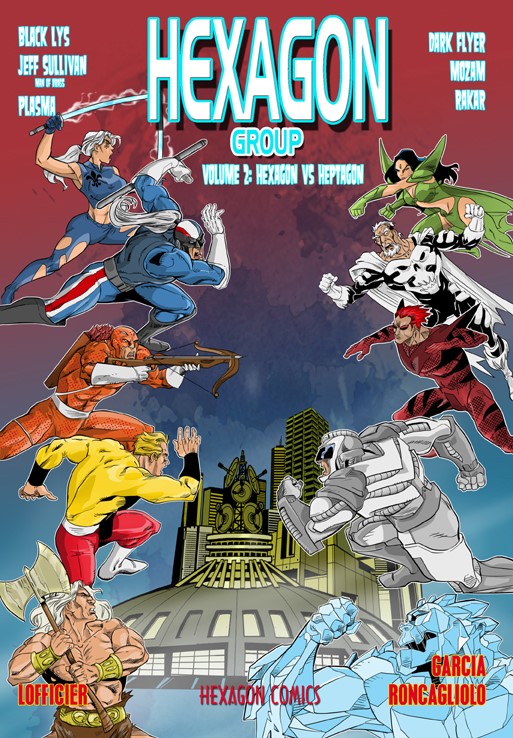 
The Hexagon Group was born either in 2002, when they made their first retroactive appearance in Strangers #1, or in the 1960s, depending upon how one looks at it.

Like The Justice Society of America and The Avengers, the group gathered together a single team of different heroes published by Editions Lug in their own series between 1964 and 1974.

There is Jeff Sullivan, a.k.a. the Man of Brass, descended from a long line of heroes; the powerful Dark Flyer; the beautiful Black Lys from France; joined here by a bevy of new members, such as astronaut Max Tornado; the African sorcerer Mozam; Gun Gallon, exiled from an extra-dimensional realm; the Lakota warrior Rakar; and Plasma, Jeff’s own daughter.

In the four stories collected in this volume, Hexagon faces the Heptagon group, an evil cabal comprised of its deadliest enemies; fight sJeff’s evil brother; teams up with the French Guardian of the Republic; and is almost defeated by the evil Necromancer.
Art by Juan Roncagliolo Berger and Eduardo Garcia.
I've been in one of those moods where comics just are not cheering me up or getting me excited as I only really follow Marvel's The Avengers and Fantastic Four since DC killed off the Justice League (reboot, reboot, reboot and then reboot was too much). Sadly not a lot else comes in these which is odd since you might think publishers would want potential readers to know what they have. When I found out the review for this book had vanished ('thank you' -again- blogger) I really did not want to review again. Deep breath.
Actually, five pages in I was feeling happier -I have no idea I am soooo old! Now the stories are good and they maintain a good continuity, pace and use action where it should be used which may sound odd but writers who are not that good often use the "I'll throw a fight in here!" trick. Now I have been reading comics a very long time and to me the stories here reminded me of Marvel at its Silver-Bronze ages best but also when Archie Comics brought back its Red Circle line in the 1980s. In other words fun and enjoyable.
The art. Well, not a single complaint there. Firstly, the use of negatives (black and white) by the artists is spot on. It's all well balanced and there are a few examples of how artists misuse b&w and get the balance very wrong. The figures are well drawn and the scenes set and drawn well.
There are times that you read a comic or book for review and you stop and ask yourself "Should I be enjoying this? Why aren't I finding anything bad here?"  Rather like Cinebook, Hexagon Comics maintains a standard where, on reviewing books you cannot find anything wrong with them. I once put my hand on Olivier Cadic's shoulder (Olivier is owner of Cinebook) and told him: "So far your titles have all been good quality and but but if Cinebook publishes a book I don't like then no nice review!" He accepted the challenge and I'm still waiting for that one below par book. I would issue the same challenge to Jean-Marc but a voice in my head shouts out: "You're English (part) -don't let the French humiliate you again!" 😂😂😂😂😂
These are enjoyable and considering some of the "art" going into the big two tiltes these days these books are a treat for the eyes.
I am still recommending Hexagon Comics
________________________________________________________________________
In case you want to catch up on What Hexagon Group #1 was about... 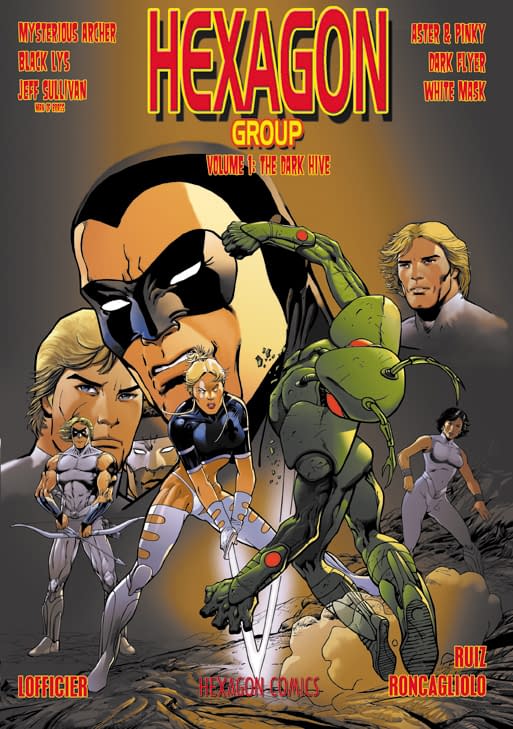 The Hexagon Group is a private organization of six super-powered heroes gathered together to protect Earth against superhuman threats. The group is financed by the personal wealth of its members, but mostly Nerotek. It is named thus because a hexagon is the perfect structure offering maximum resistance and tensile strength. The Hexagon Group is headquarted in New York; it has worked together with C.L.A.S.H. and other U.N. organizations. It has at its disposal a vast array of advanced technology, mostly invented by Cletus and Dominik Nero and Sweet.

The FOUNDING MEMBERS of the Hexagon Group were Jeff Sullivan, Dark Flyer (I), Black Lys, The Mysterious Archer (I), White Mask, Aster and Pinky, who were brought together to defeat Melanos. After the disastrous affair of the Black Hive, White Mask resigned and swore to never work with the Group again.

Max Tornado and Mozam then joined the Group, but Max Tornado soon asked to become a "Reserve Member" because of his duties towards NASA.  Dax (Mysterious Archer I) was recalled by the Brotherhood of Archers and replaced by a second Mysterious Archer, Jukka Häyhä. At that time, after a battle with Fred "Blackie" Sullivan, Gun Gallon, exiled from the other dimensional realm of Orios, joined the Group.

Later, the Necromancer managed to get control of the Group and forced them to battle the Strangers on the Moon. Jeff Sullivan appeared to die there and was replaced by his brother, Fred, who had reformed. Ben Leonard then joined the Group under the alias of "Râ". The Group was recently manipulated into fighting the Enchanters, but soon teamed up with them to battle the dark goddess Aruna.

I know what you are asking: "Terry, what can you tell us about this book?" Nothing.  Seriously, if that history above does not get you curious then having a full plot synopsis will do nothing!

There is some character information so you don't sit there thinking "Who's this?" -in fact, you could just take these as new characters. The artwork within compliments the stories superbly. Honestly, I neverread the story until my third pick-up of the book. I was dealing with another computer breakdown and glanced at the cover of this book and next thing I knew I had forgotten the PC!

The art, especially by Berger, is superb. This is what Harrier Comics could have been. The art is so smooth and detailed and the printing quality is so good that panels pop out at you.

I will be honest with you: I have only been really excited  three in the last few decades when it came to new comics. Once was in the 1970s with Seaboard's Atlas Comics and the other time was in the 1980s when Archie brought out its Red Circle Comics and the 1980s Hong Kong Jademan Comics. Since then things have just plodded along. Is it weird that at my age I am now getting so excited by a new (rejuvenated) line of comics?

Please do yourself a favour and try a copy of this book. I hope it might spark fresh enthusiasm in others. 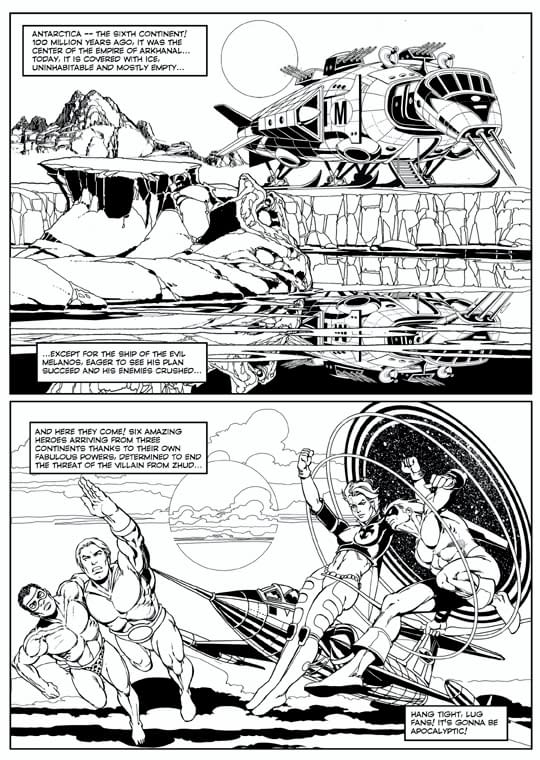 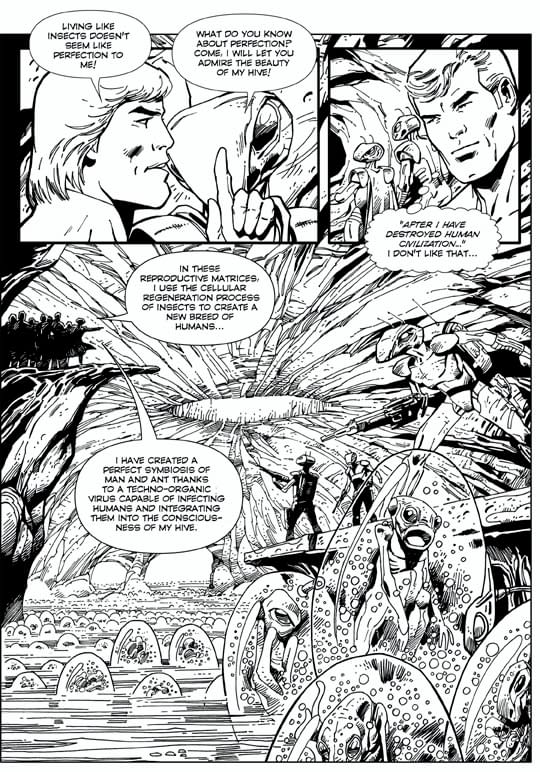 Posted by Terry Hooper-Scharf at 06:23