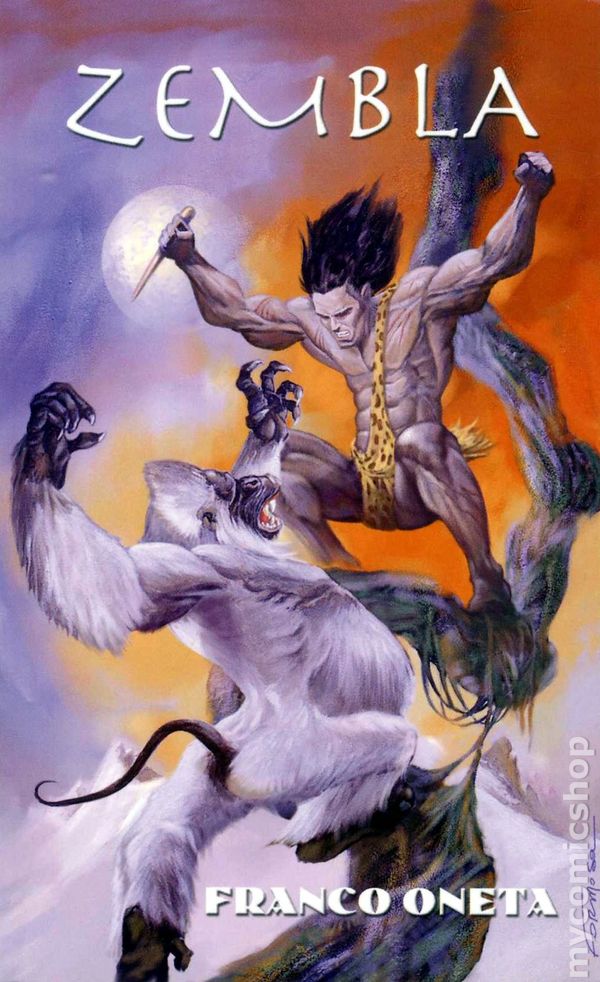 “Raised by lions deep in the African Republic of Karunda, Zembla has the power to converse with the beasts of the jungle and has sworn to preserve the ecological sanctity of his adopted land…”

Read that and you might think “another Tarzan rip-off” but you would be wrong. Italian artist Franco Oneta drew the adventures of Zembla starting in 1963 and only stopping after 30 years!!  Zembla is one of the best loved characters in French comics. And what a character.

I did get confused after the origin story because suddenly a host of secondary cast members had appeared such as Ye Ye (Zembla’s love interest though she feels ignored); Rasmus who is just so insanely out of place in the jungle!!  That said there is lynx cat (?) called Satanus and Hara of whom I can only say “what a guy!”.  Of course, there is the kangaroo (Petoulet) so there’s a lot of cartoony capers with it and Satanus. Yes, I did write kangaroo…there’s also a bear pops up in a story.  By Rasmus’ appearance I’m guessing they were all part of a circus.

“The Wrath of Boor” sees some great gorilla art.  The battle between Zembla and his crew and the gorillas looks great!.  More apes, evolved this time, in “The Super Apes Of Anthar”.  There is some bonus art at the back of the book including character sheets by Oneta in a cartoony style for a Zembla animated series.  Completely different to his serious work.

If I have one complaint about these Hexagon Comics it is that they are small –I would love to see this artwork in an A4 book.  But that’s me –I gotta get a gripe in somewhere!

But this is a treat and, yes, I’m feeling spoilt again!

For more info on Zembla (and getting on to the Hexagon site) go here:

Posted by Terry Hooper-Scharf at 09:06