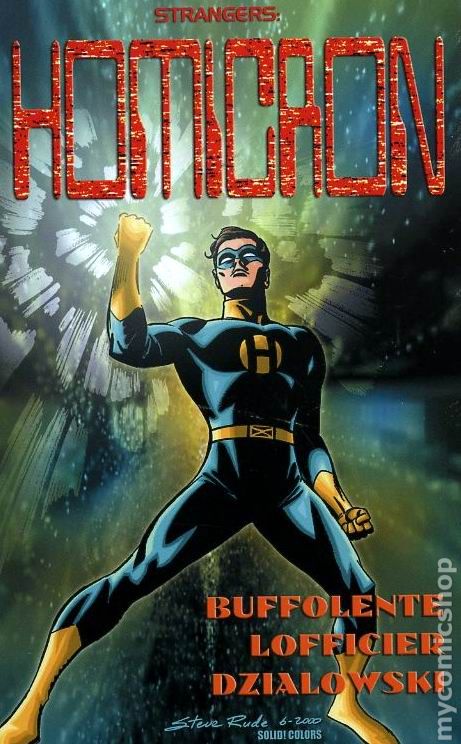 
This is a whopping thick book. You get the original stories of how Homicron came to Earth and the newer stories.  It’s an epic so how to summarise? I’ll cheat and quote the Hexagon Comics character fact sheet:
Homicron is a native of Alpha, a planet inhabited by a peaceful race of scientists whose Envoys turn into energy beings to explore the cosmos. Homicron’s adventures before his arrival on Earth remain mostly unchronicled . Homicron rescued the Apollo 19 capsule carrying Major Ted White, Lt. Robert Ross and Dr. Jonathan McDouglas, and enabled the craft to return safely to Earth, but by so doing, became trapped by the planet’s magnetic field. When Major White succumbed to a heart attack, Homicron merged into his body, inheriting his memories and his fiancée, Dr. Rita Tower, a NASA physicist. Dr. Tower designed an energy converter which enabled Homicron to regain human form.


Homicrons subsequent attempts to recontact his homeworld attracted the attention of the Kyrosians, a race of imperialistic aliens. They captured Homicron and attempted to convert his energy into pure plasma, but only succeeded in driving him insane. Eventually, Ted White’s host body could no longer contain Homicron’s energies and disintegrated. The energy was then absorbed into Dr. Tower’s body, who now exists in a symbiotic state with the Alphan Envoy. The new Homicron then became allied with the mysterious team known as The Strangers.


Strangers had an English language six issue run through Image Comics a few years back.
The stories are good, there is almost a Captain Mar-Vell (original)/Green Lantern thing going on here but with European style and flair.  Now this one ought to appeal to comic fans who are into super heroes but have not tried a Euro comic. A cosmic super hero, evil aliens –it’s got the lot.


The art on the original strip I liked so I was dreading getting to the up-dated stuff –some times there’s a bit of visual jarring when you get used to the original art and suddenly there is a new artist with a new style.  In fact, the new style works and there was no visual jarring to confuse my old mind.  Italian artist Lina Buffolente created Homicron in 1972 and is one of those Italians working in comics that we in the UK never hear of (there were Italian artists working in UK comics).


Lofficier and Dzialowski revamping the character works well and explains why I’ve seen images of a male Homicron and a female Homicron!  We also see Homicron as she/it becomes more integrated in the Strangers universe of C.L.A.S.H., etc..


Well worth getting hold of and if not in shops, where it should be, you can order online here:

Posted by Terry Hooper-Scharf at 01:40