SPLIT! The "Other" Captain Marvel 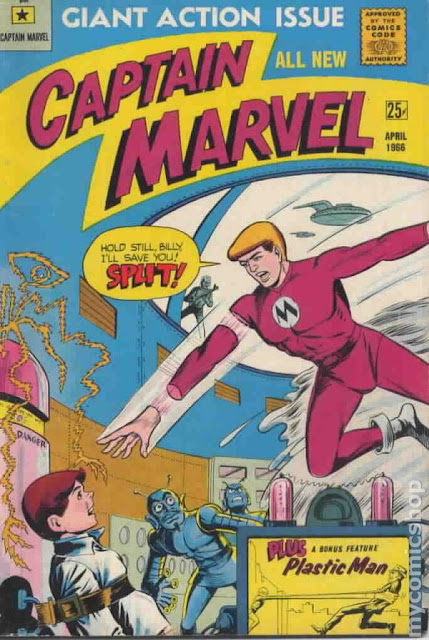 
Somewhere around 1967/1968, either at Jarman's newsagents in Mina Road, St. Werburgh's or the newsagents at the top of Grosvenor Road, near to Cheltenham Road, where I bought comics and Plastacine -it was my secondary "go-to" location.  Hey, I was ten years old -I had comic locations, okay?  Anyway, I purchased a copy of Captain Marvel no. 2, 1966.

Thinking about it, I'm sure it was at Jarman's but we're going back a, uh, few years now.

Before Multicoloured Swap Shop and Tiswas destroyed kids Saturday mornings, it pushed out the cartoons and serials like Zorro, I used to be downstairs in front of the Telly watching Rocket Robin Hood, Gigantor or Marine Boy and I'd look through my Captain Marvel.

Ten years or so later I would be, uh, "persuaded" into buying the rights to publish Captain Marvel and that is all explained in another posting: http://hoopercomicart.blogspot.co.uk/2012/02/myron-fassthorpe-porter-and-me.html 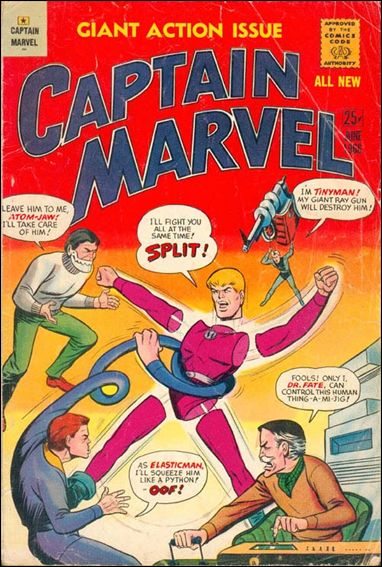 The character has been much aligned by people who, obviously, have either not read the comics or are part of that head-up-their-arses crowd who think a super hero comic has to conform to their high standards -those of modern DC or Marvel comics.  Sad to say the comics of today have very little fun in them. 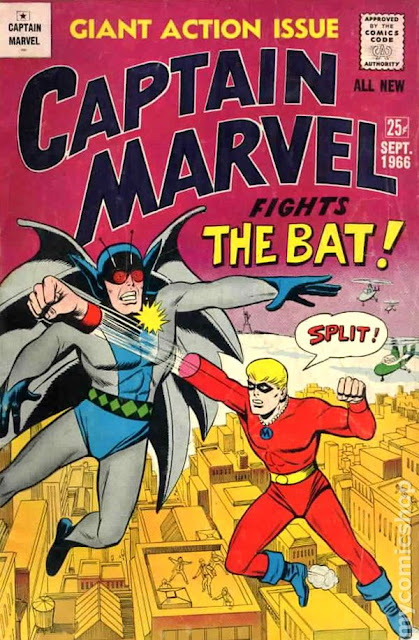 In fact, when I receive Jon Morris' The League Of Regrettable Super Heroes for review I noted that Captain Marvel was in it.  I opened up the entry and...the character was matter-of-factly dealt with. I could only mutter "wow". 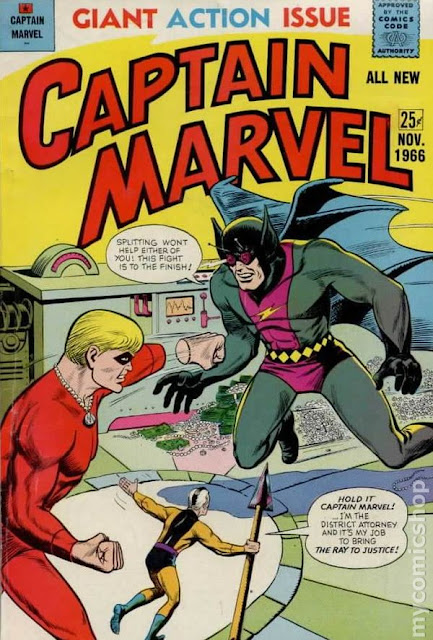 Captain Marvel no. 4 -the last issue in the run

M. F. Enterprises was owned by 1970s pulp magazine entrepreneur Myron Fass, who also owned the rights to black and white horror comics under the banner of Eerie Publications.  See my first link above regarding that in the UK.

M.F. Enterprises best comic was based on a concept by the creator of the Golden Age (Timely) Human Torch. Art Carl Hubbel and written by Leon August In fact, the credit for script is given to Roger Elwood with art by "Francho". No other credits on the other stories so I assume it was the same writer-artist team throughout.  Issue 2 has no credits but the art style is similar and the writing. issue 3 has story and inking by Carl Hubbell but no penciller credit but this may have been done by Hubbell.

The character of The Bat returns in the final issue but due to concerns over any Batman similaries leading to National (DC) lawsuits, he was now the Ray. Stories are by Leo August and art is credited to Carl Hubbell which seems to back up the idea that he drew everything in no. 3. 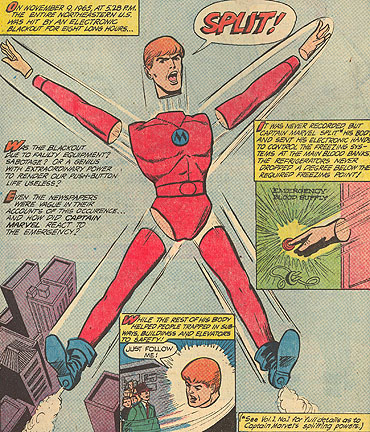 In the first issue we learn that Captain Marvel is in fact an alien android (rather like Burgos' Human Torch who was an android) and arriving on Earth he suffers some bouts of amnesia and even forgets meeting the lad who will become his side-kick, Billy Braxton. 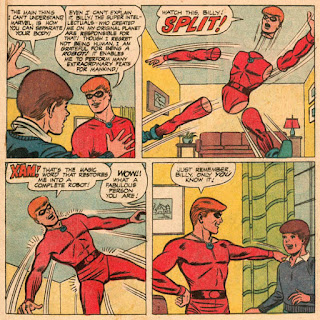 Above. No, I just don't see a domini mask hiding CMs alter ego.


Now Billy keeps referring to him as "Captain Marvel" and we learn that with the boy's help CM secured his first job as a reporter. That gets him in some interesting situations but later CM decides to try time travel to the past and computer controlled future. There are also aliens mixed in. And in the final issue we learn CM now has an alter ego.  Suddenly he is Professor Roger Winkle. Then comes the donning of a domino mask while in costume....let's just not think too long and hard on that one. 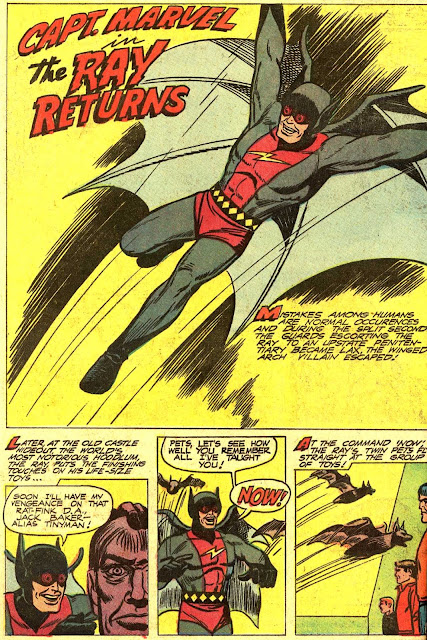 This MFE Captain Marvel could fly and had other abilities but the main one everyone focusses in on is the ability to seperate, move and control every part of his body -fingers, hands, feet, legs, head (NO if you are going to think of other childish items of the body go away!) which he could do by simply calling out "Split!" and for the body units to reassemble "Xam!" (pronounced "Zam!").

The title, sadly,  lasted only four issues but.... 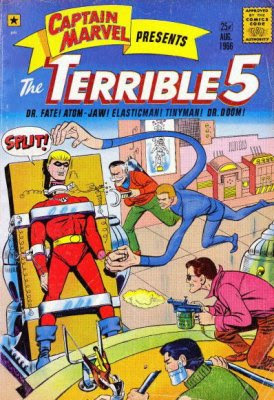 Captain Marvel Presents The Terrible 5 no.1

The character was to return -not that he ever went since all the titles carried the year "1966" on the cover, with the "1967" exception on the cover of  Captain Marvel Presents The Terrible 5 no. 2, which was the final issue of that. Dr Fate, Atom Jaw, Elasticman, Tiny Man and Dr Doom were the bad guys.  Tinyman had gone from villain to DA to villain and was almost a side-kick to Elasticman when...well, remember I mentioned that the domino mask CM wore to disguise himself?  Elasticman is watching an item on TV with Tinyman and sees Prof. Winkle  "Put a mask on him and he's Captain Marvel!"

I did write that it seemed a pointless disguise.

There were some cracking fun stories with some little twists that still stand out today -Atom Jaw going from bad guy to reforming for one. 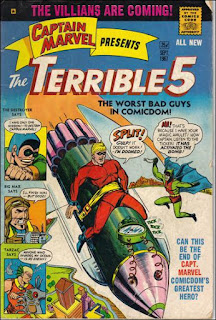 Captain Marvel Presents The Terrible 5 no. 2 -the final issue.

But you cannot keep a good android down. The MFE version of Captain Marvel later made a cameo appearance, along with a whole bunch of other alternate versions of (the now DC Fawcett) Captain Marvel, in 1997 in issue #27 of The Power of Shazam! . The MFE character is shown performing his body splitting but while wearing a traditional Fawcett Captain Marvel thunderbolt costume. No. Just no.

Myron Fass jumped in on the super hero money wagon that went "BOOM!" and 1966-1967 was it. Fass then moved on but did continue with his Eerie Publications line until 1981. 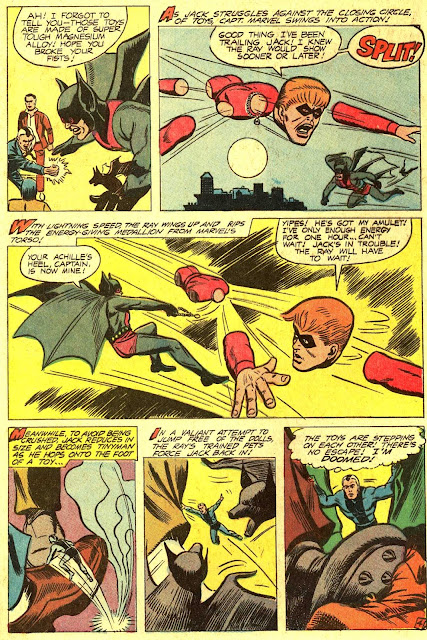 I believe Bill Black's AC Comics republished some of the MFE material back in the 1990s but I've never seen it and whether he, too, purchased rights I have no idea.

But the inspiration has continued in a way because Black Tower Comics has featured Canada's own android body-splitter "CM" for a good while -he featured in Return of the Gods. And I have me plans to use those rights I bought some time!
Posted by Terry Hooper-Scharf at 08:53