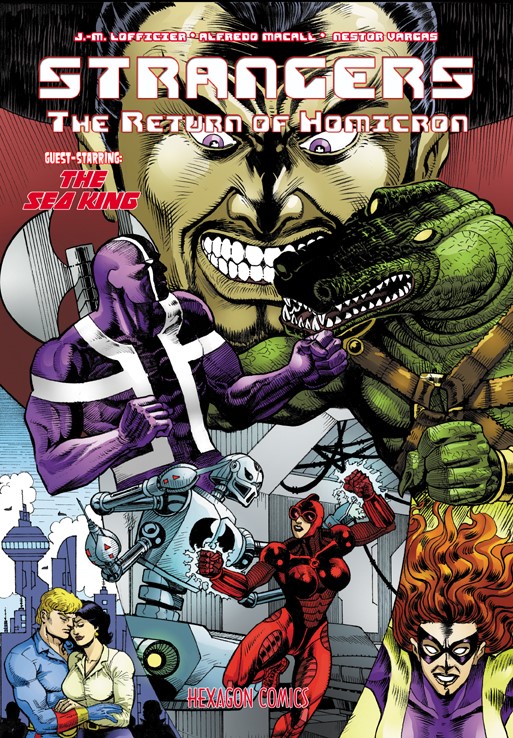 THE SEA KING, a young naval officer who gained the power to breathe underwater thanks to his uncle’s experiments...

MARINO and EGA, two “kidz” from the alien sunken city of Kosmos with their own strange aquatic powers...

MISS METEOR, a scientist who traveled to the negative dimension of Zhud where she gained cosmic powers in a freak accident...

THE ZORR-KO, a powerful android built millions of years ago by the mighty Fomore civilization and abandoned on Earth...

These characters, all “strangers,” have been brought together by TANKA, a former jungle lord recruited by entities from our planet’s farthest future and now empowered to protect our world from extra-terrestrial menaces.

In this seventh volume of Strangers, the mission of our heroes is to travel to the Kosmos to reclaim the water component of the powerful Kera weapon, and to Zhud to rescue their fellow Stranger Homicron, while thwarting the evil schemes of two would-be conquerors....

These two incredible journeys to the lowest depths of the oceans and the furthest reaches of space are beautifully drawn by Alfredo Macall and Nestor Manuel Vargas.
The first thing I noticed was the cover art which as a very Manhua look to it so that got me intrigued from the get-go. Of course the stories are well written and fun to read and as I have written before if you have one person keeping it all together then continuity does not suffer and Lofficier does this well.
Alfredo Macall's splash page hooked me and from there on in it was pure fun. Action scenes and so much more are rendered wonderfully and I wonder how the pencil-like shading is achieved -my guess is that its a digital. I do not use digital artwork and so I have no idea what is available to the comic artist. The underwater scenes are very well done and I never expected to become a fan of Macall's work.
Cover artist Vargas returns for the two part The Coming of Miss Meteor and The Return of Homicron. That sub-Manhua style is still evident and the details and lovely black and white art style works. In fact, I just realised that some of the art reminds me of certain strips in the old Bastei Verlag comics Spuk Geschichten and Gespenster Geschichten and that gave me a sudden nostalgia rush...which I was not expecting.
In all seriousness I hope some of those who check these reviews are at least trying Hexagon Comics because if you are not then you are missing out. Macall and Vargas are two very good artists who deliver the goods and combined with the Lofficier stories -you cannot do better!
Posted by Terry Hooper-Scharf at 05:11