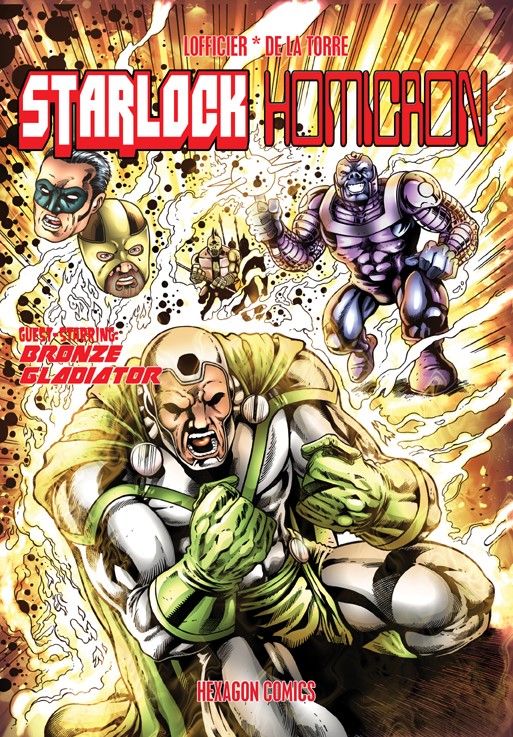 ISBN-13: 978-1-61227-037-7 - US$12.95
https://www.hexagoncomics.com/shop-starlock-homicron.html
When STARLOCK was still a cosmic Guardian working for the Towers, he once had to fight the invincible SCILIX and his demonic hordes from Cepheus. However, he did not  meet that challenge alone. He was assisted by the ORIGINAL HOMICRON from Planet Alpha, and the mighty BRONZE GLADIATOR from Arena, whose planet was threatened by the unstoppable forces of Scilix…

Also included in this issue, in color for the first time ever, the SECRET ORIGINS of STARLOCK guest-starring STARCYB, HOMICRON and C.L.A.S.H .

Two cosmic sagas illustrated by Spain’s Mariano De La Torre.
I don't need to tell you that the story is great fun and action because it seems to be a given and that may well be down to Lofficier controlling all of this so that the Hexagon universe is consistent and there are no continuity flaws. Reading this one I suddenly realised that it was like reading the American comics as a kid. A character is set on a path and then without warning ..another pops up and the story continues but there is an introduction of some kind so that youknow who the newcomer is. A good example of this was DCs All Star Squadron in the 1980s written by Roy Thomas and thses Golden Age characters would pop up and someone would say "I've heard of you" followed by their story if not origin being revealed. It's that kind of fun read.
Anthony Dugenest, a creator in his own right (Le Patrouilleur) works on the colours in this book and his colour style is recognisable.  The colour adds more atmosphere and sets the scenes drawn by De La Torre which takes us through this veritable saga. Fun and action from cover to cover,

Posted by Terry Hooper-Scharf at 05:03