Hexagon Comics: STRANGERS 6: AGAINST THE OVERBRAIN 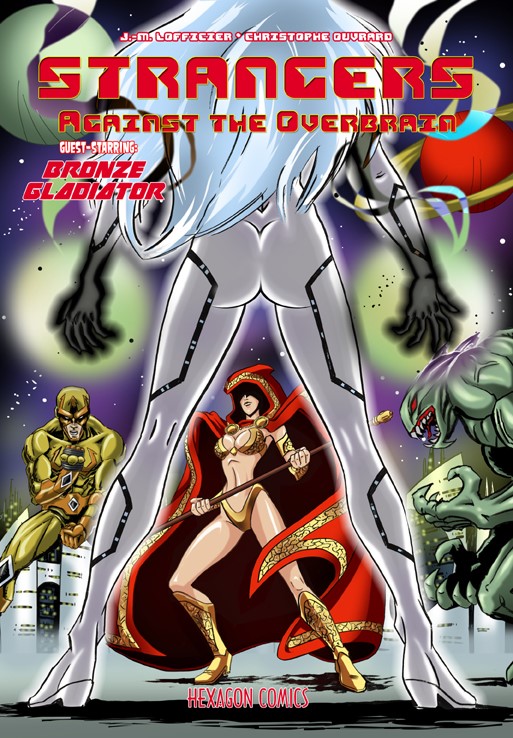 JAYDEE, a teenage, alien metamorph, abandoned on Earth as a baby, who may well be the deadliest killing machine in the known universe...

FUTURA, a mysterious woman from a parallel dimension with strange abilities...

XANI-RHU, former agent of a Galactic Federation of telepaths...

These characters, all “strangers” to Earth, have been brought together by TANKA, a former jungle lord recruited by entities from our planet’s farthest future and now empowered to protect our world from extra-terrestrial menaces.

In this sixth volume of Strangers, the mission of our heroes is to travel to the deadly prison planet of Vo’tun to rescue their fellow Stranger Jaleb and crush the evil Overbrain and his schemes of galactic conquest....

This incredible journey to the furthest reaches of space is beaitifully drawn by Christophe Ouvrard.

It's an interesting concept and if you never caught the Strangers series from Image Comics well....it was a good while ago now (though the trade is available from Hexagon). The story is good and well paced but then Lofficier KNOWS these characters inside out after all this time so what do you expect?
The art is clean and there is some good use of grey toning (no idea what they use now but it used to be Letratone or Ziptone) to fill in negative (white) spaces effectively. At one point I realised that the style was similar to UK artist Dave Harwood who did a lot of work for Harrier Comics in the 1980s (HMS Conqueror etc). But only similar in places of course.
Overall it's a very enjoyable read and do not get put off by black and white art -it has a whole skill set that -hand drawn- computer artists cannot manage to master. I will probably be told now the comic was drawn using a computer! 😂
If you can give Hexagon a try. See what you think because, as I have said before, these are good old style comics but on story and fun reading not jumping on the latest trend.
Posted by Terry Hooper-Scharf at 06:31