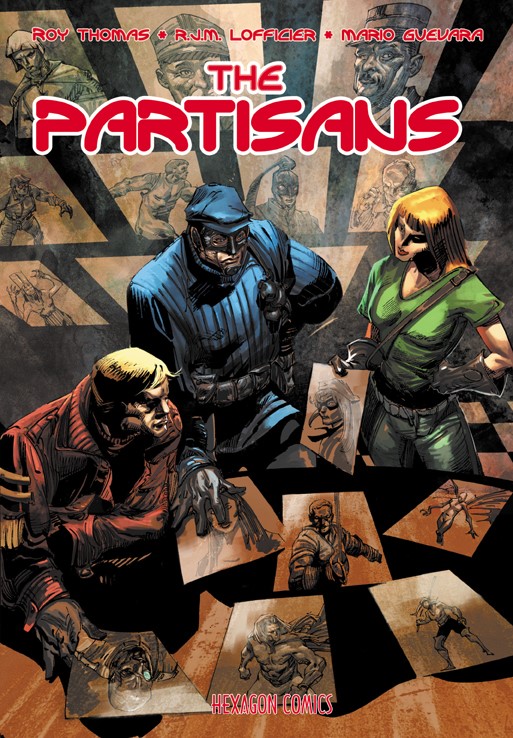 ISBN-13: 978-1-61227-787-5 -
US$9.95
https://www.hexagoncomics.com/shop-the-partisans.html
JUNE 1944. The day before the Allied landing. A group of super-powered Nazis threatens the success of Operation Overlord: Stahlmann, Vampyr, Scarlet Lips and other, even more terrifying creatures that can stop the progress of the Allied troops on the beaches of Normandy...

But Churchill and De Gaulle have anticipated the danger! They dispatch a team of fearless heroes led by Captain Rick Ross, a.k.a. Baroud, the Archer Princess Sadko, the French Guardian of the Republic and Marianne, the famous Black Lys, the legendary Metal Man and the young American Ricky Rox...
The fate of Europe is now in the hands of THE PARTISANS!
A prodigious saga of the last days of World War II published in France to commemorate the 70th anniversary of D-Day and brilliantly staged by Roy Thomas, R.J.M. Lofficier and Mario Guevara.
Source Material: Les Partisans
That cover is so reminiscent of All Star Squadron #1 from DC with the great  Rick Buckler cover. You know -this one: 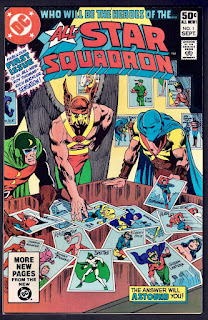 That got me interested but then I saw the credit Roy Thomas. If there is one comic book writer that knows about the Second World War period and super heroes it is Thomas. Usually American super heroes through the aforementioned All Star Squadron and for Marvel The Invaders. But now new scope for his creative mind with Jean-Marc & Randy Lofficier scripting so what did I think (and to be honest here I was excited about Thomas but the story concept...?)
As it turned out this was a fun read and Guevara's art style is used to great effect to distinguish itself from American comics books (I feel) but still in a style that would be accepted and read by American comic fans. The problem is that you get a few American comic fans who have never read a European comic or anything other than U.S. comics and they will cite Tin Tin or Asterix as "standard" for "foreign comics" whereas Hexagon U.S. is catering for American readers and its comics should slip in amongst the Independents quite easily. Being long winded in the typing finger what I am trying to say is that this is good comic book art and deserves a lot more attention.
Some times I just can't shut up my typing! But I get enthusiastic and Guevara brings some nice characterisation to the players in this book.  How many untold stories of The Partisans are there? No idea but I hope there are more.

Posted by Terry Hooper-Scharf at 07:30