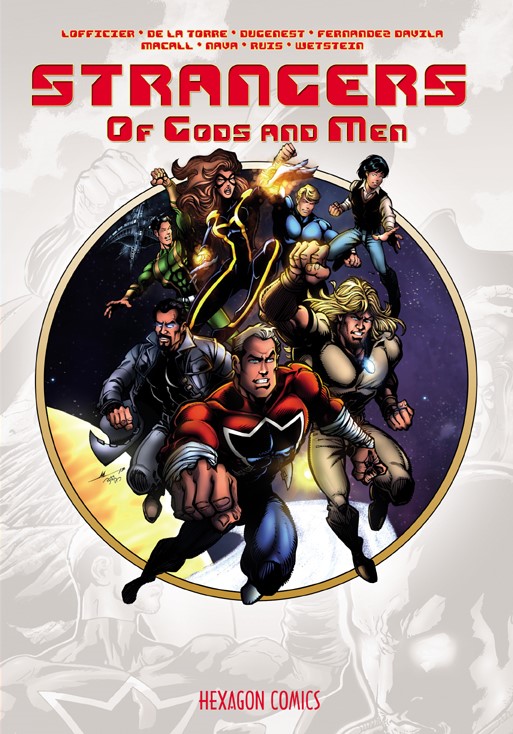 HOMICRON is a NASA scientist whose body is inhabited by a mysterious alien from planet Alpha. STARLOCK is the former servant of supremely powerful cosmic entities who has managed to escape from his Martian prison and is hiding on Earth. FUTURA is a mysterious woman from a parallel dimension. JALEB is the secretive agent of a Galactic Federation of telepaths. JAYDEE is a teenage, alien metamorph, abandoned on Earth as a baby, and who may well be the deadliest killing machine in the universe...
These characters, all “strangers” to Earth, are brought together by TANKA, a former jungle lord who has been recruited by entities from our planet’s farthest future to be their “time agent” and is now empowered to protect our world from extra-terrestrial menaces.

In this third volume of Strangers, which completes the second season of the series, the Strangers at long last confront the supremely powerful galactic entities known as the Towers, who desire to recapture Starlock. Meanwhile, Futura faces up to the deadly Zorr-Ko and the god Coyote, while Jaleb is hunted by the Galactic Federation. Special guest-stars:  Ozark, master of the Mystic Arts, Stormshadow, shaman of the Twilight People, and the Hexagon group!
Six full-length stories written by Jean-Marc Lofficier with art by Sergio Fernandez Davila, Mariano De La Torre, Anthony Dugenest, Alfredo Macall, Victor Nava and Alfonso Ruis.
Source Material: Strangers #13-18

Read that, Marvel Comics? No killing off the character Ka-Zar to then "bring him back" which, honestly is so passé and is like Kevin (I run out of ideas all thetime) Smith writing the He Man animated series and smirking and bragging how he never just killed He-Man once but twice.  Here jungle Lord Tanka is used effectively to make a group gell together and what a group!
Three quarters of this book is in full colour and the last quarter is black and white. The colour  artwork is great but the b&w work stands out to me -which may be down to my mainly working in that medium. As a whole though the mix works and if Tanka is who keeps the characters united then Lofficier is the writer who makes it all gell because he knows and has developed the characters over the years -just as Roy thomas knew the DC and Marvel Golden Age characters and how to use them.
I did write before that the Strangers series was like The Avengers comic but I realised my mistake. Reading through them again it is like a mix of The Avengers and The Defenders of the Bronze age and that, as many old time comic fans will know was THE creative and most loved era in Marvel Comics.
I hope more peopledo get into Hexagon as the amount of work put in by Lofficier and the creators deserves more recognition.

Posted by Terry Hooper-Scharf at 07:30