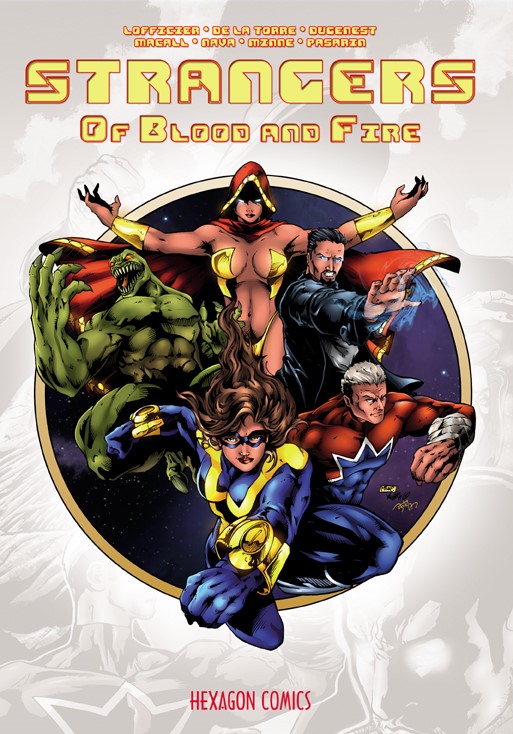 In this second volume of Strangers, which collects the first half of the second season of the series, Jaleb and Futura search for Wathan, the secret agent of the Great Mind who seeks to plunge Earth into total chaos. Meanwhile, Homicron faces the judgment of her own race on Alpha , while Tanka and Jaydee face another deadly Salamandrite on the island of Haiti. With special guest-stars: Phenix, Hunter and The Dark Flyer!
Six full-length stories written by Jean-Marc Lofficier with art by Mariano De La Torre, Anthony Dugenest, Alfredo Macall, Pierre Minne and Fernando Pasarin.
Source Material: Strangers #7-12

If you are a real comic fan then you will know what "more bang for your buck!" means (oh, behave). Comics used to featuring solo characters or duos and rarely you might have a cameo by a more popular character to boost sales or because someone in editorial thought "Why the heck not?"
Back in the early 1960s, Radio City Comics (Archie) had old Goldn Age characters guest in The Fly or Fly-Man -in later issues Fly-Girl had appeared. Eventually this led to The Mighty Crusaders title and when Stan and Jack over at Marvel thought "Let's bring our top guys together" we ended up with The Mighty Avengers and at DC Comics we got the Justice League of America. Okay, some of the characterisation was not great but you had all of these group comics featuring a team of heroes rather than a solo character book.  We loved them.
All of those characters were established in what became known as the Marvel, Archie and DC "universes".  So fairly easy to bring together and get a story rolling. So what about a whole catalogue of characters from time and space and Earth who had no connection and had never met before?   What Lofficier has done is build a Hexagon Universe and create links  and storylines that bring heroes -Strangers- together and keeps the pace and characterisation flowing. If you have one person doing the writing and who knows the characters and the directions he wants yto take them in then it can be fun (look at Roy Thomas's All Star Squadron and The Invaders).
This book starts pulling the threads together and there is some gorgeous colour work to enhance the artwork which all took me back to finding those Marvel team books when I was an unbearded youngster (beard only grew when I got to 10).
If you like team book, action and good art then why are you not buying Strangers yet? This cheered me up on a dull Saturday morning.
Posted by Terry Hooper-Scharf at 05:55