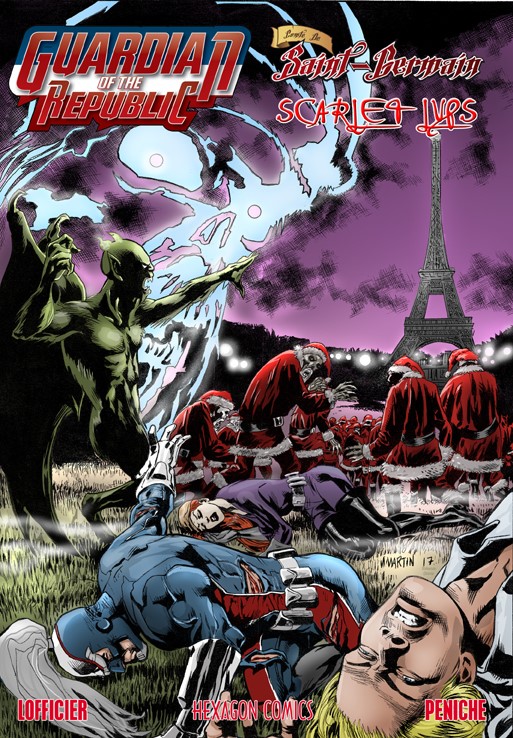 It is Christmas Eve in Paris and the dead emerge from the catacombs, dressed as ghastly Santa Clauses, plunging the French capital into total panic.

Faced with this terrifying threat, the Guardian of the Republic and Marianne find two unexpected allies: the immortal Count Saint-Germain and the vampire Scarlet Lips.

But will even they be enough to stop the threat posed by the Hangman of Bethune and his mysterious new ally, Baphomet?

A blood-curling Holiday saga told at the fireside by Jean-Marc Lofficier and Manuel Martin Peniche.
How can you go wrong with super heroics and...the undead? Plus sneaky and evil baddies and a cracking story to go with the Peniche black and white artwork -because any horror story should be in black and white!- and you have a fun read.
the characters become more familiar after reading their other stories and the universe created for them seems likely to turn up a time travel, space or horror tale.  The cover looks very nice and was the first thing I spotted out of the postal carton.  The number of characters available are many and they all seem o work well under the unified history they now share -Lofficier's overseeing all the books it keeps the continuity going.
This is a one off so if you wanted to try a Hexagon comic why not try with this one?
I do love fun comics.
Posted by Terry Hooper-Scharf at 09:12