Hexagon Comics: TALES OF THE HEXAGONVERSE 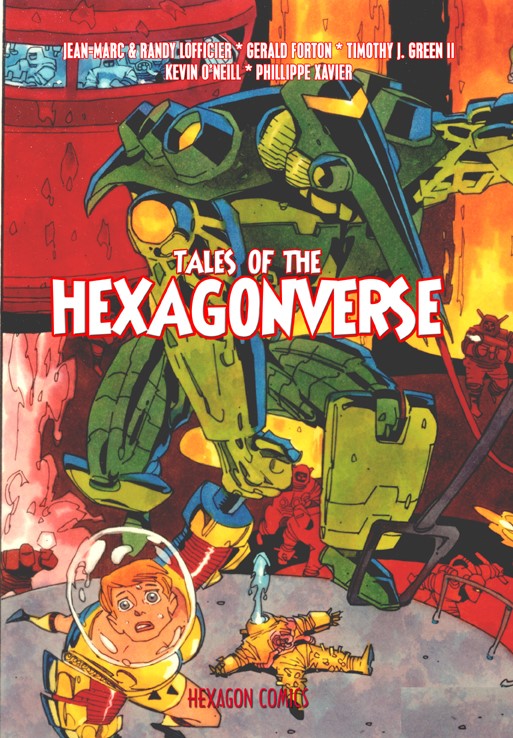 Hexagon Comics isn’t merely Wampus, Zembla, Phenix, and the Strangers. For well over sixty years, they published a number of anthology comics in the tradition of DC’s Mystery in Space, Strange Adventures, etc., with colorful titles such as Yuma, Nevada, Mustang, Rodeo...

In addition to the regular hero-driven series, these books also contained many one-shots: war stories, western adventures, supernatural tales, etc. A few of the characters who first appeared in these eventually returned, but most never went beyond these initial appearances.

In this book, we have translated and reprinted five of these one-shots, published between 2000 and 2003. Only two have ever been published in the U.S. before and, as they were all drawn by remarkable artists, we felt that they deserved greater exposure.
I sat down and looked at this cover and tried to think whose work it reminded me of? It took a while until I saw the artists noted on said cover. It is of course the work of The League of Extraordinary Gentlemen own Kevin O'Neill (or Kev as we knew him in the old days). This sets the tone of the book.
If you like science fiction then you ought to really enjoy this.  Timothy J. Green II's work is obviously heavily influenced by the great Moebius. Finely detailed and crisp art.  Gerald Forton on Cassandra has a slick b&w style that works really nicely but as I read this I suddenly  realised that Cassandra being "remolded" was the same thing that happened to the legendary British newspaper strip heroine Scarth in the early 1970s...bit obscure rference there!
Philippe Xavier has an equally nice art style and some of the pages are taken over by certain panels that you feel obliged to look at in detail! Very enjoyable.  O'Neill on Nightspeeder shows why he was popular with 2000 AD readers back in the day (the "day" being the 1980s). I think some of the work looks better than his later Moore collaborations.
Over-all this is a real treat and I noticed something on the cover that I bet others won't 😛 Mnor but ifyou work on editing boks and covers the eye catches it quickly but it is nothing of importance as the main thing is the book and I was surprised by the contents as I get bored very quickly by sci fi -but if you are a fan then this is going to tickle yourfancy!
Posted by Terry Hooper-Scharf at 08:01