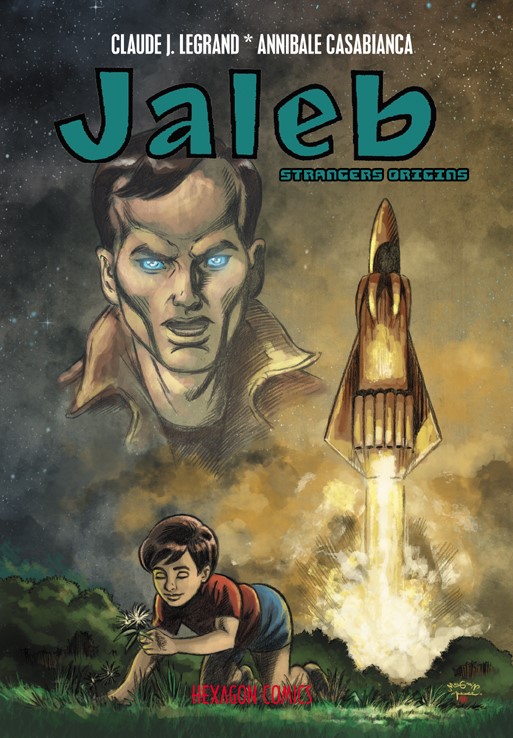 1. JALEB THE TELEPATH
2. SECRET POLICE
3. THE GIRL FROM BOULDER TOWN

Jaleb began in the magazine Futura in 1972, which heralded the “Second Age” of French publisher Editions Lug, introducing an entire range of new characters such as Homicron, Aster, the Time Brigade, Jeff Sullivan, etc.


These were the brainchildren of science fiction writer Claude Legrand, who was influenced by the novels of great masters such as Poul Anderson, Robert Heinlein and Theodore Sturgeon.


Jaleb is accidentally left behind on Earth as a baby by a team of explorers from a Galactic Federation of telepaths. He is found and raised by a couple of Oregon farmers. As an adult, he uses his inherited telepathic powers for good as a private detective, but a chance encounter with a Federation Observer leads him to discover his true origins...


The first three episodes of this ground-breaking series by Legrand and artist Annibale Casabianca are collected here for the first time in English as part of a set devoted to the origins of the heroes who are later gathered together in Strangers.

If like me you spent time trawling old book shops as a youngster -my great find was Bristol Book Centre on Gloucester Road, Bristol. Run by an American lady who used to sing opera- then you would have discovered the Pulps. Apart from completing a collection of Sax Rohmer's Fu Manchu and Doc Savage (long since go to pay off bills) I used to love staring at the pulp covers. As soon as I saw this cover it took me back.
The story was almost like a pulp novel -across between pulps and B movie sci fi/horror. You can see how Legrand's influences show through.  The three stories feature action, mystery and glowing eyes! But after all this time do the stories hold up to time? Yes, no mobile phones or computers and those are elements you could take out of any modern story as convenient plot short cuts. Besides which, if you have Jaleb's abilities you really do not need a computer or phone...after all look at the 1960s TV series The Champions  -here you hide the secret city in the Himalayas is replaced by Jaleb's home world.
This was a fun read and it's a pity more people are not discovering these gems and Jaleb has as much to offer as Wampus....but without the weird look and evil plan!
Posted by Terry Hooper-Scharf at 04:40