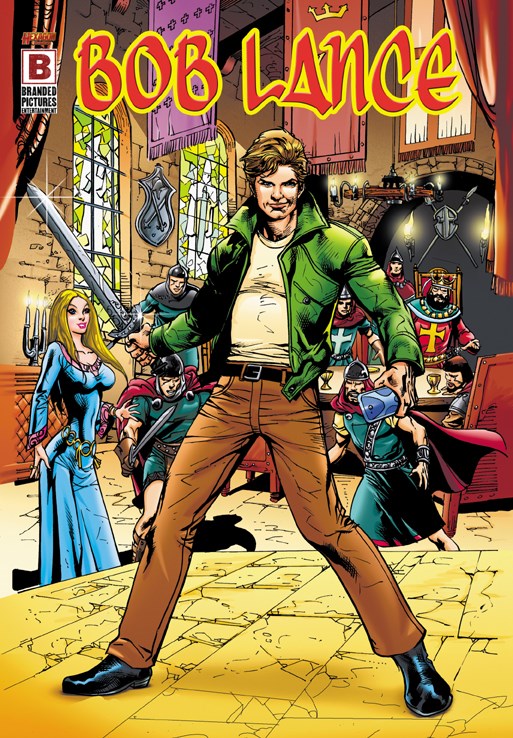 Pier Carpi & Luciano Bernasconi, cover by Roberto Castro.7x10 squarebound comic,
64 pages
b&wISBN-13: 978-1-61227-393-8,
US$12.95.
https://www.hexagoncomics.com/shop-bob-lance-1-the-round-table.html
When young Robert Lance leaves his posh British university, he has no idea that he is about to step into the mysterious world of the secret order of the Round Table, and that he himself is the descendent of the legendary Lancelot.
Thrown into this unfamiliar world of shadows, Bob and his new friend Guinevere must first face the curse of a witch once burned at the stake by superstitious villagers...
Love the cover.  Like the way the king looks as though he is looking past Lance and
is thinking: "Is that man drawing us??"
The printing is exquisite with sharp black on white and the art itself might be called by some trendy idiot "old school". No computers used to draw anything and you are looking at the work of a skilled artist who knows how to use negatives (b&w), cross-hatching and shading effectively -Luciano Bernasconi, of course, created the legendary character Wampus.
Although Bob Lance was created in 1970 by Pier Carpi and Bernasconi none of the work has dated -the art is in fact better than in some modern US comics. And since the action is set in the past that certainly is not going to be a drawback. In fact Bob Lance became one of Hexagon's most popular series and now English readers can get in on the fun. If you've always been interested in European comics but the foreign language put you off along with ordering from overseas -no more!
Start your collection today with Hexago Comics!
Posted by Terry Hooper-Scharf at 08:18