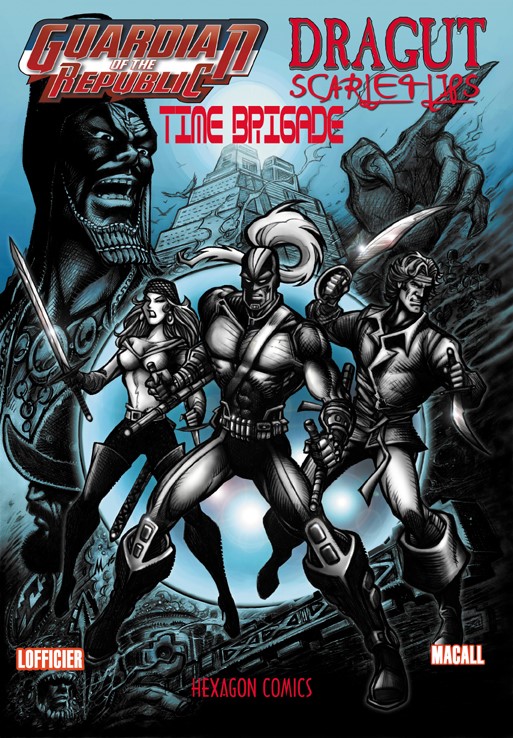 Who is the mysterious enitity who has transported the indomitable GUARDIAN OF THE REPUBLIC to Mexico in the 16th century? And for what obscure reasons?
The course of history is being threatened by the invasion of the powerful Baal-Sagur, a.k.a. THE NECROMANCER, who intends to chase the Spaniards and other Westerners from the New World and seize control of the American continent for himself. But the villainous mastermind did not plan for the intervention of CAPTAIN DRAGUT and his lovely companion, the vampire SCARLET LIPS...
What role will the GUARDIAN play in this frantic battle for the future of the New World? And will the TIME BRIGADE from the 41st century be able to thwart the machiavellian traps that an old enemy of theirs has laid across the strands of time?
This historical epic by Jean-Marc Lofficier and Alfredo Macall starts on XMas eve and spans three eras in a mad quest for the control of the future.
Source Material: Garde Republicain Special Noel 2015
"Guardian of the Republic & Dragut & Scarlet Lips & Time Brigade" what a mouth full! I prefer the title "Once Upon A Time...In The West!" The Necromancer has launched a campaign to kick Europeans out of America -imagine the way that might alter everything today. Conquistadores, giant robots and some epic battles with three heroes thrown into the mix and Macall draws it -that is bound to be a winner!
Imagine you lived through three years of that,  What a sory to share with friends.  Except a certain Time Brigade erases your memory of the events.  Some of my fondest Avengers comic memories are when some of the team journeyed back to the Wild West -it was fun to read. This story may not contain Marvel's Avengers but it is just as much fun.
In all honesty, if you do not buy these books now it is no good in a few years time finding out how good they are and then pay the extortionate Ebay or Amazon prices to buy copies! If you want fun and action buy today!
Posted by Terry Hooper-Scharf at 06:04