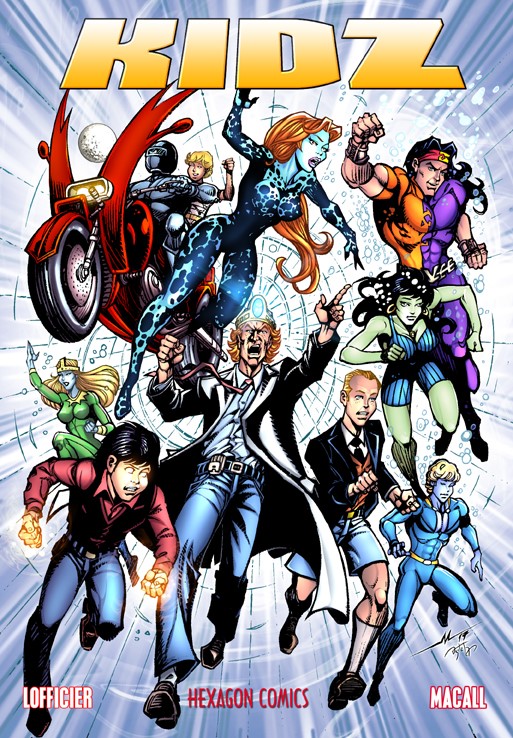 J.-M. Lofficier & Alfredo Macall
7x10 squarebound comic,
52 pages
b&wISBN-13: 978-1-61227-895-7
US$10.95 / GBP 8.99
The difference between Kidz and other teenage superhero books like Teen Titans, is that none of the members of Kidz were sidekicks; all were once the stars of their own series in the 1960s and 70s. Unlike DC and Marvel, Hexagon’s predecessor, Editions Lug, did not hesitate to publish books starring teenagers!
When a trio of powerful super-villains brings the U.S. to its knees, incapacitating all adult heroes, the only hope left are... THE KIDZ!  Brought together by the eccentric scientist ARCHIE BOLT, a new team assembles, composed of IVAN WOLONSKY, teenage psychic, the sub-aquatic champion MARINO, motorcycle master MOTOMAN, energy construct creator QUBE, super-genius SUPERBILL and, from the depths of cyberspace itself, the amazing FL@MBO! Together, they fight their first battle against a triumvirate of evil comprised of former foesd that have forced the surrender of the United States!
The teenage heroes of the Hexagon Universe gather for the first time in this book-length saga by J.-M. Lofficier and Mexican artist Alfredo Macall.

I looked at the cover and thought "Kidz" well this is going to be a let down" and I have no idea why. The UK had plenty of child heroes in its weekly comics so why I was so negative I have no idea. We live in strange times, folks and nothing is stranger than my mind (which is quite normal).
The story and concept works really well and I would like to think that a company like Thomson or Rebellion could do this type of thing but so far old characters used by Rebellion have been rebooted and Americanised. What Hexagon have done here is to prove that with a good writer who knows all of the characters and a good artist you can make an interesting comic featuring kid heroes.
Of course, you have to have the best dastardly villains, too!
A lot of people are checking these Hexagon reviews out and I do hope some are gpoing to buy because otherwise people are really missing out.
Posted by Terry Hooper-Scharf at 05:49