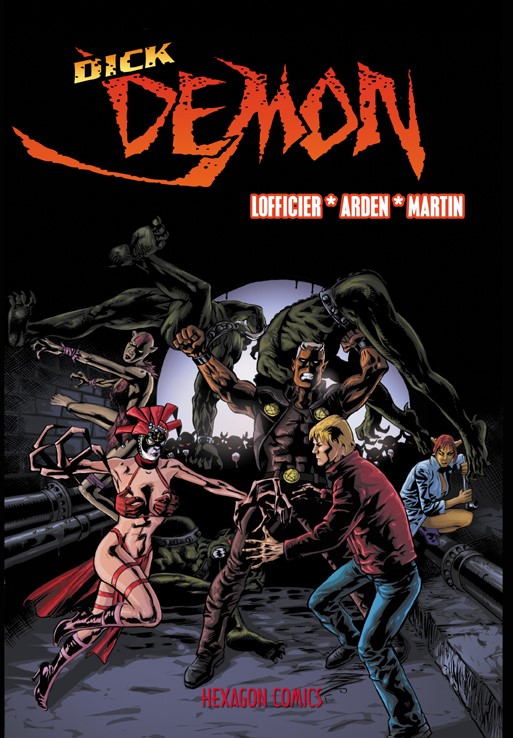 ISBN-13: 978-1-61227-874-2.
US$26.95 - GBP 19.99
https://www.hexagoncomics.com/shop-dick-demon-vanishing-point.html
Returning to Los Angeles to investigate the death of his father and the disappearance of his brother, Harvard student RICHARD DAMON discovers the existence of a monstrous conspiracy spanning millennia...
The Twilight People, chained for centuries, are now awakening, smelling the fear that permeates the City of Angels on the ever of this new millennium, for that is the one delicacy that creatures of the night find the most delectable... But then, comes one who pushes back the forces of darkness... "DICK DEMON!"
In this exciting supernatural thriller, writer Jean-Marc Lofficier, French artist Arden and Mexian artist Manuel Martin Peniche join forces to explore the underside of Los Angeles and set the stage for several major elements of the Hexagon Universe yet to come.
Zatara was killed (originally) and Zatanna took over. Sargon was killed and his son took on the mantle and Salem Brownstone's father was killed and he took over ("Who is Salem Brownstone?" look it up) and now Richard Damon finds himself in a similar situation. Too much of a common trope in comics? Well, there is a very old saying "Those who live by the occult die by the occult" so there 😛
How will this lead into other Hexagon stories? The last panel and the name uttered will tell you! Really, if you are a comic company and you do not have some character who deals with all the demon, vampire and occult stuff then what are you doing?  There are some nice character twists here and it's good to see the world Demon will be inhabiting built up and it will be interesting to see how the character evolves.
Posted by Terry Hooper-Scharf at 04:38