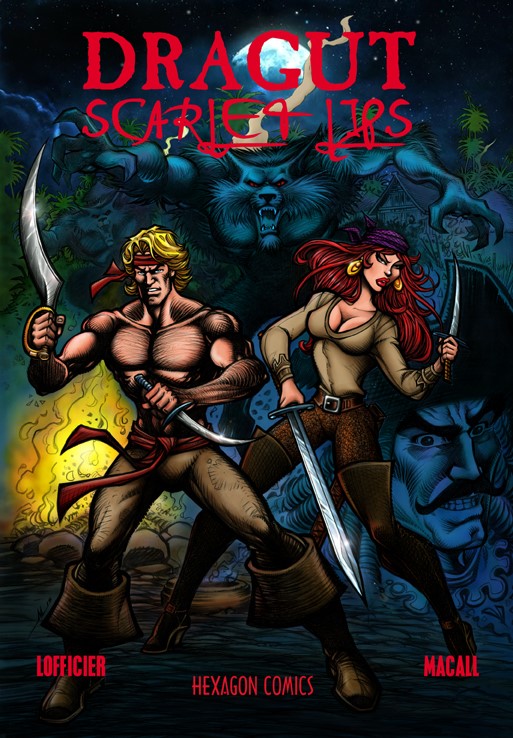 Contents:
- The Ghost Ship
- Captain Hook
- The Island of the Croatoan
- The Son of the Dragon
- Blood Bath
- Scarlet Lips
- The Scepter of Moloch
- The Holy Providence
- The Fire of God
- Dragut's Revenge
In the year of our Lord 1542, Captain Dragut returns from a perilous mission to the Sargasso Sea, when his ship is attacked by the bloodthirsty privateer known as Captain Hook. Taken prisoner to the island of the Croatoan, a tribe of shapeshifting beast-men, Dragut is saved by the intervention of a beautiful female vampire nicknamed Scarlet Lips...
In a second  story, Dragut and Scarlet Lips team up to fight the dreadful inquisitors of the Holy Providence, who have been puirsuing the Captain and are responsible for the death of his mother...
The adventures of Captain Dragut ar inspired by the life of a real historical privateer born in 1485, who died at the siege of Valetta in 1565. Following in the footsteps of Conan the Freebooter and Captain Blood, writer Jean-Marc Lofficier and Mexican artist Alfredo Macall have combined forces to tell a seafaring saga of creatures and corsairs, magic and monsters, in the 16th century.
What do I need to write?! Shape-changing beastmen, pirates, vampire and magic. Come on that has to have raised your interest somewhat...if not...are you dead??
Lofficier seems to the the traditional comics writer -able to turn scripts out for any period or scenario and make them interesting and fun.  Macall must be enjoying himself as an artist;he has taken us to the past, present and future and possibly all three in one story! It does give me hope for at least good comics coming from Independents when I see things like this.
If you do not get in on Hexagon Comics now you will be sorry when they take off and you'll be paying flippers 2-3 times the cover price for a "key" issue. Considering the absolute mess Marvel Comics made of the recent Avengers "Enter the Phoenix" storyline it is a breath of fresh air to read things that make sense and are not just wasting paper.
Recommended
Posted by Terry Hooper-Scharf at 04:56