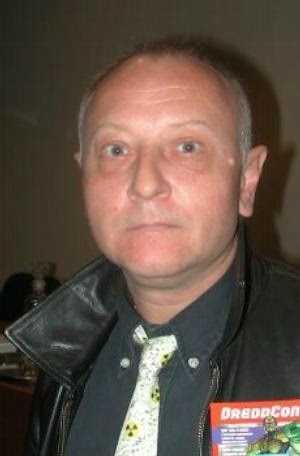 Apologies for the lateness of this news.  For some reason when I checked it was gone from blogger.  Sad news.

The man known around the world for his work on Judge Dredd and Rogue Trooper passed away at Ealing Hospital on Monday night (February 16). He was 59 and suffering from emphysema.

The legendary artist, who lived in Cowper Road all his life, was famous for his work on landmark science fiction anthology 2000AD, the home of icons like Judge Dredd.

He also co-founded the British comic magazine series Deadline in the 1980s.

It is understood he had been taken to the hospital in Southall with acute breathing problems.

A devout Buddhist, who turned to the religion following time spent in Nepal, he was regularly seen walking through Hanwell with his shaved head and walking stick, and enjoyed a quiet pint at his local pub.
He went to Hobbayne (SP) Primary School and Drayton Manor High School, in Hanwell, before developing a flair for art.

In later life he suffered mental health problems and spent time in prison, in 2012, after a policeman was stabbed in the hand during an altercation at Mr Ewins’ house.

Ealing North MP Steve Pound, who was a close friend of Mr Ewins for more than 20 years, paid tribute to the artist. He told getwestlondon: “He was just this ordinary guy that spent his whole life in Hanwell.
“He was this wonderfully impish figure who loved speaking about his art, but I don’t think he knew he was a world-famous artist.

“He would tell me how much he would enjoy going to The Viaduct pub and having a pint of Fullers on his own.”

The MP said the spell behind bars had a terrible impact on his friend. He said: “I visited him two or three times in Wormwood Scrubs and you could see him shrivelling before your very eyes.”

But he said he would rather remember Mr Ewins for his genius: “He was a stunningly original artist, way ahead of his time.

2000 AD paid tribute to Mr Ewins on its Face Book page . A statement said: “Throughout his years of working for 2000 AD, Brett was responsible for some truly unmissable art - from Judge Dredd and Anderson Psi Division to Rogue Trooper and his incredible work on Bad Company with Peter Milligan and Jim McCarthy.

“He was also a hugely influential figure in British comics thanks to his founding of Deadline with Steve Dillon in 1988, something that changed the face of the industry forever.”

His unexpected death prompted tributes from fans, friends and colleagues on social network sites.
On Twitter Michael Bonner wrote: “Sad to hear the news of Brett Ewins passing. My first editor on Deadline. A lovely man and a great artist.”

@jonnyRebel_UK tweeted: “Sad to hear of the passing of @2000AD legend #BrettEwins rip, so influential, such a loss,” while David Hunt added: “Very sad to hear the news that Brett Ewins has died. Fantastic artist whose work I copied endlessly as a teen.”

On Facebook, Ryan Davies wrote: “RIP The guy was a massive part of my childhood growing up in the 80's, from his work in 2000ad to the art on the space raiders packets. He was definitely a figure who cut his own path in life. Thanks Brett. X.”

And Jules Boyle said: “He was a real gentleman and an amazing artist. RIP Brett,” and Danny Wreight wrote: “RIP, one of the all time greats.”

It is believed he was working on a graphic novel with close friend and fellow comic-creating great Brendon McCarthy at the time of his death.