Hexagon Comics: Morgane and Strangers 5: The Kindom of Shivar (Oh, and STRANGERS IN A STRANGE LAND!) 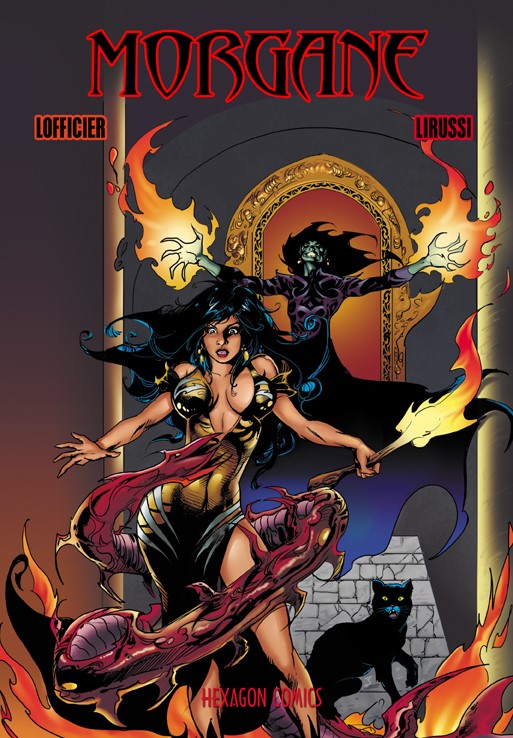 7x10 squarebound comic,
48 pages
b&w
ISBN-13: 978-1-61227-787-5 -
US$9.95
Order via: jmlofficier@yahoo.com
Young Morgane Gorlyer works for a prestigious French fashion magazine, but she is also the descendent of the original, much maligned, Morgan Le Fey, an enchantress who was King Arthur's sister and heir to the secrets of Vivien, the Lady of the Lake, Queen of Avalon.
With her boyfriend, Faust (the son of Goethe’s character), who was cursed to spend his life as a black cat until Morgane freed him. she is forced to thwart the evil schemes of her jealous childhood friend Alecto and her deadly companion, Lord Raven, and face the awesome might of the dark god Shivar himself…

This 44-page occult saga, which transports us from the dark woods of ancient Brittany to the swanky haunts of London’s high society, is brilliantly illustrated by renowned Argentinean artist Mauro Lirussi.
The story from this book carries over into Strangers #5. 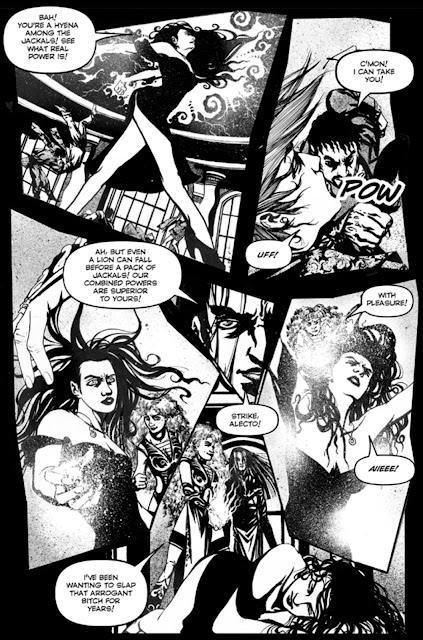 This was a nice and enjoyable romp into the world of Arthurian legend and modern day sorcery...and action.  The story and dialogue are well written but no surprises there. The artwork by Lirussi I loved. I've seen a similar style used in one of the Graphic Classics series a few years back. In black and white it looks incredible and far better than the reproduced image above. I was expecting artwork similar to that on the cover so whaty I discovered inside was a treat.
Lots of betrayal and skullduggery as you might expect when it comes to demonic pacts and sorcery!
nnnn 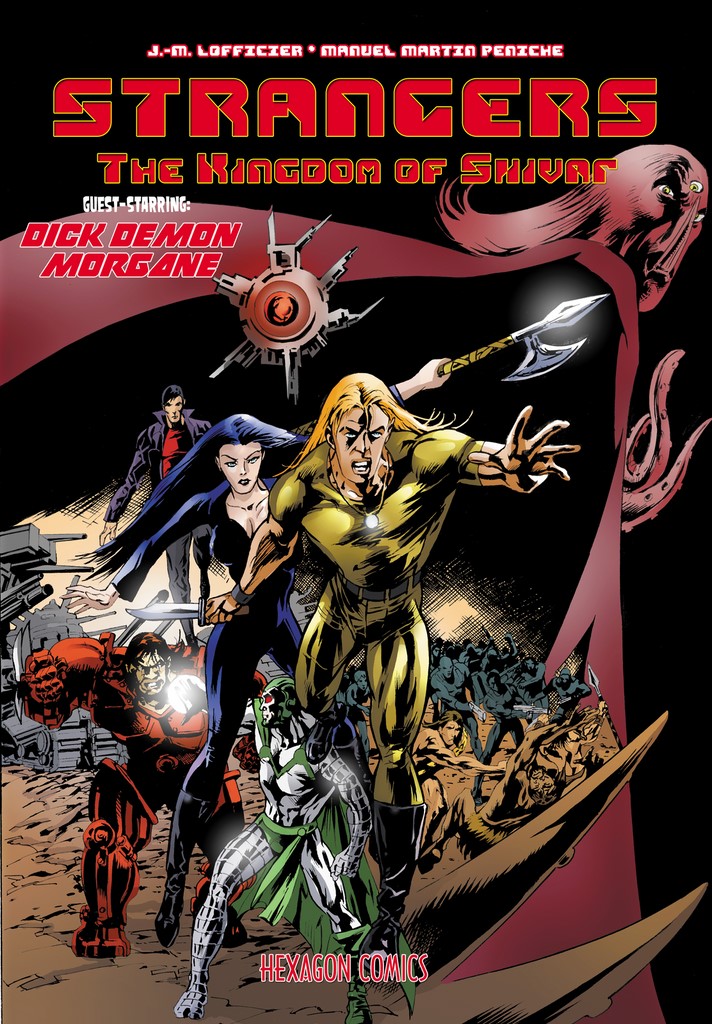 STRANGERS 5: THE KINGDOM OF SHIVAR

7x10 squarebound trade paperback,
96 p.
b&wISBN-13: 978-1-64932-006-3
US$12.95
Contents:- Foreword by J.-M. & Randy Lofficier- Strangers vs Dick Demon by Jean-Marc Lofficier & Manuel Martin Peniche- The Kingdom of Shivar by Jean-Marc Lofficier & Manuel Martin PenicheDICK DEMON is a descendant of Gal, the first Lord of theTwilight People, fugitives from another universe...
STORMSHADOW is the powerful shaman of the Twilight People...
STARCYB is a servant of the Towers, supremely powerful cosmic entities and ancient enemies of the Twilight People...
MORGANE is a witch, descended from the legendary Morgan Le Fey...
ZEMBLA is the Lord of the Lions, king of the jungles of Karunda...
RICKY ROX is a young genius who developed a device that creates a field
that temporarily places him outside of time...
These characters, all “strangers” to Earth, are brought together by TANKA, a former jungle lord who has been recruited by entities from our planet’s
farthest future to be their “time agent” and is now empowered to protect our world from extra-terrestrial menaces.
In this fifth volume of Strangers, the quest for the all-powerful Kera Weapon continues...

The demonic KRUGE, usurper of the Twilight Throne, seeks to acquire it in order to consolidate its power. Helped by STORMSHADOW and the witch MORGANE, DICK DEMON is the first to find the clues to the location of Kera in the strange and indescribable Mirrorverse...

Meanwhile, Kruge uses TANKA and STARCYB for a brutal assault against the forces of Twilight... Then, TANKA and MORGANE must invade the kingdom of Shivar, the merciless Lord of the Abyss...

Finally, STARCYB, ZEMBLA and the PATROL OF THE DEPTHS enter the underground world of Kamandur, where the search for Kera brings them into conflict with the Mods and the Gheos, and their champion, the powerful WAZILLA...

This incredible journey to the edge of reality in fabulous and demonic universes is superbly drawn by Manuel Martin Peniche.


Again -story and script very acceptable 😁 and taking in a lot of locations and scenes. Peniche really goes all out on this one 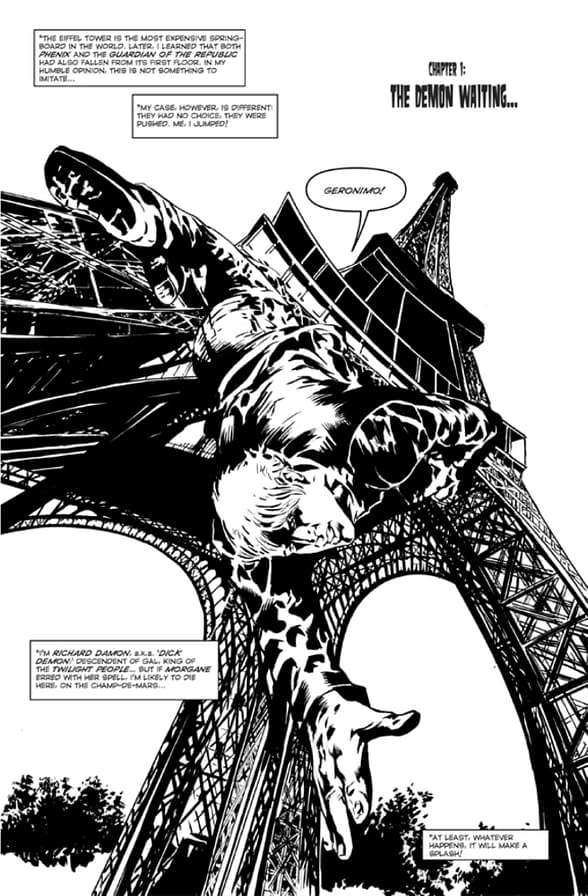 The story outline tells you all you need to know and, I've written it before but this is like a good old Marvel Bronze age comic full of characters and action and it's enough to keep any comic fan happy.
Hexagon has shown that someone can publish high quality comics/comic albums and graphic novels in b&w...as I have been saying, writing and doing since the 1980s. The books and characters are like a breath of fresh air.
It's going back a long ways now but if you think the name "Strangers" is familiar that could be because Image Comics published a six issue run.
Coincidentally that six issue run is available in a trade 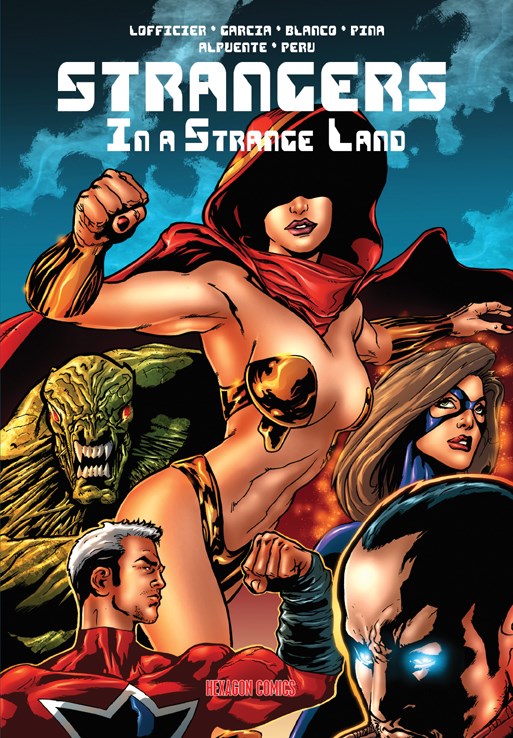 Homicron, a NASA physicist whose body is inhabited by a mysterious alien intelligence from planet Alpha... STARLOCK, the former servant of awesome cosmic entities who has managed to escape from his Martian prison and is hiding on Earth... JAYDEE, a teenage alien metamorph abandoned on Earth as a baby who may well be the deadliest killing machine in the universe... JALEB, the secretive agent of aGalactic Federation of telepaths... FUTURA, a mysterious woman from another dimension...
These characters, all "strangers"to Earth, are brought together by TANKA, a former jungle lord who has been recruited by entities from our planet's farthest future to be their "time agent," and is now empowered to protect our world from extra-terrestrial menaces...
From the deadly Astaroth to the mysterious Necromancer, from the super-powered Hexagon group to the star-crushing villainy of Duke Oxian, in this saga, their first adventure together, the Strangers must learn to unite and fight together to save Earth, while trying to escape the shackles of their own individual destinies...

Six full-length stories written by Jean-Marc Lofficier with art by Eduardo Alpuente, Fernasndo Blanco, Manuel Garcia and Javier Pina.
Source Material: Strangers #1-6
So you can get in at the start of the Strangers adventures and see how the team has developed in THE KINGDOM OF SHIVAR .
You will not be disappointed and me? I need to get Strangers 0-4!!
Posted by Terry Hooper-Scharf at 09:27