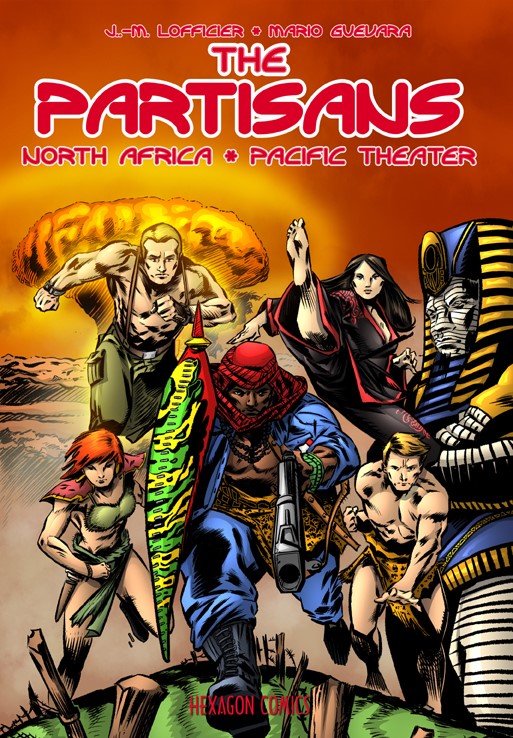 1942. North Africa. Under the direction of Erwin Rommel, the Nazis prepare to seize the mysterious city of Heliopolis, once the home of the mythical Egyptian gods and the depository of all their secrets. This will insure Germany’s victory and her domination of the world.

But in order to stop him, French General Leclerc has gathered a team of PARTISANS, comprised of Baroud, the Guardian of the Republic of Senegal, the amazon Antales, young Tanka, the legendary Imhotep, and the powerful Wazilla.

1945. Pacific Theater. The Americans’ plan to seize Okinawa is compromised by the sudden arrival of a powerful alien, Lord Manduk of Vaur, who teams up with the formidable Japanese scientist known as Madame Y.

This book presents two World War II sagas about crucial events that, if allowed to unfold, might well have changed the course of history, without the intervention of the heroic champions known as… THE PARTISANS!

The last time a "new" comics line got me this excited was in the 1980s when Archie Comics brought back their action heroes in Red Circle Comics (NOT the 21st century mess up).

Good story. Good characterisation. The art looks nice and for "North Africa"  Guevara uses a grey tone style which contrasts with "Pacific Theater"  and its black and white style. A mixture of characters from various nationalities in exotic settings -I can't complain because Black tower has been doing that since the 1980s. I think that these Hexagon books deserve a wider readership.

It was interesting going through stats last night and finding that the usually high views for Cinebook reviews was surpassed by those for the Hexagon books!

These books are good fun and adventure and to most feature 'new' characters so give the books a try and, PLEASE, order from the company itself. Fun comics need all the support they can get.

Posted by Terry Hooper-Scharf at 06:32