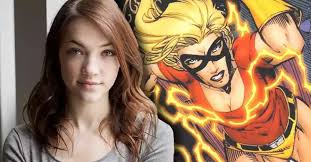 By Michael Ausiello
The Flash is adding a little girl power to its expanding company of Speedsters.


Beane’s Jesse — who will appear in multiple episodes of the CW smash — is characterized as a brilliant but quirky college student who gets caught up in the battle between The Flash and Season 2 Big Bad (the not-yet-cast) Zoom.

DC Wiki, meanwhile, describes Jesse Quick as “the alter-ego of Jesse Chambers, a heroine with super-speed powers. Chambers is the daughter of Golden Age heroes Johnny Quick and Liberty Belle; she would later go on to adopt her mother’s name. Her speed powers are accessed by speaking a special formula, although she also has her mother’s abilities.”

Posted by Terry Hooper-Scharf at 08:09